I once again ran the 9/11 run in Arlington,va. It was a beautiful night for a run.  Yes I said night.  This race is always an evening race followed by yummy food and all you can drink beer. Needless to say many nonrunners run this race because you don't have to get up early, it is a great way to honor 9/11 and the party at the end of the race. So when I see a runner puffing on a cigarette before the race I just have to laugh. Obviously not a regular runner.  Or at least I would hope he is not a regular runner who smokes before a run.

Of course before the race I was waiting for Brad and Jen and who taps me on the shoulder but Gary. 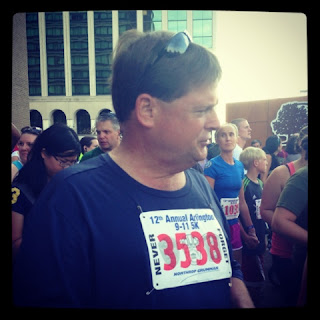 We waited for some Shirlington run club people for a photo op. I found Jen but no Brad. We took the group picture and then got ready to run. 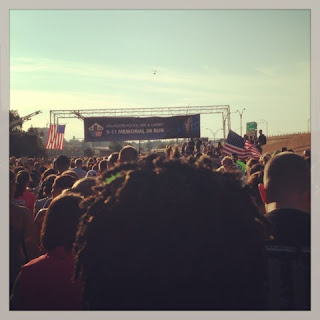 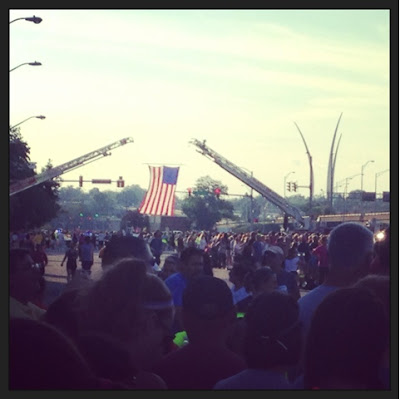 It was a new route this year. Instead of running the pentagon parking lot, which I detest, we ran around the entire Pentagon. 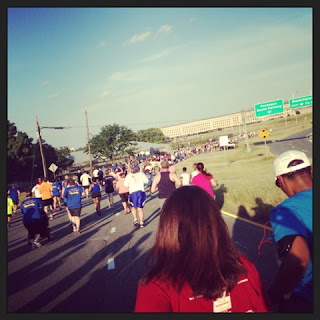 It was beautiful night for a run. Normally it is really hot for this race but temps were a bit cooler which made for some great winning weather. While running around the pentagon we heard some great bagpipers. 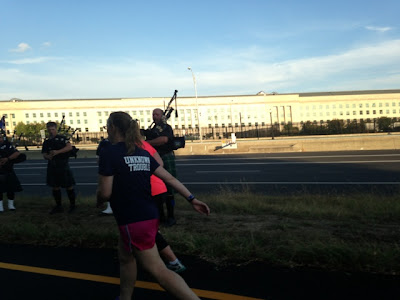 Met up with Jen for the last mile.

Lots of strollers in this race. The only time I was fearing my life would end by stroller accident was during the last half mile. A grandpa was running with a stroller and felt like he could take up the entire turn. So if that was the only stroller incident for me it was a very good run.

We finished, got our medal and headed off for food. 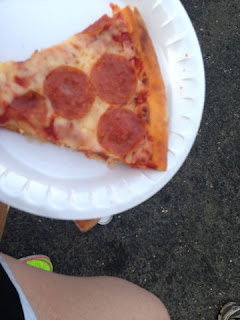 They also had burgers, dogs, smoothies soda, and beer.  We made it through the crazy food area and sat down to see if we could find Brad. We never found him before the run so we figured we would see him after.

When trying to find Brad we figured he might be near the beer. I mean if you are going to look for someone you should always start with the beer line. Well we didn't find Brad but we found beer. 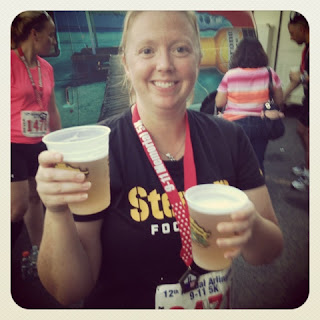 And course we found Gary. Brad was alive and well because Gary was able to run into him.  We never were able to find Brad. 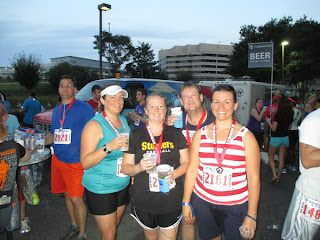 This was probably my favorite course for 9/11.  I'm hoping that they stick with this same course and they do not go back to running that horrible parking lot.
Posted by Running Librarian at 2:53 PM

Looks like a really cool run! Yes, I've been very busy. :) but it's great.

Fun! I've never done a race that has pizza at the end. Beer, yes. No pizza. Now I have something to strive for!

What a great run!! And, to end a run with beer and pizza and friends? Perfection!

Oh cool! This race looks awesome! I'd love to run around the Pentagon! And the after party would be cool too!