I have been up since the a.c.o.d. (the a$$ crack of dawn).  Actually before the a.c.o.d. I met Megan at the lot to head up to the Cherry Blossom run.  Parked and Becca and Zack pulled in front of us..it was as if the time gods were on our side.  We headed to the metro and ended up on the front car with not a lot of people and we could sit.  When we got to the race we headed straight for the portapotties.  Once again time was on our side and not that bad on the line.  Checked our bag and headed to our corrals. 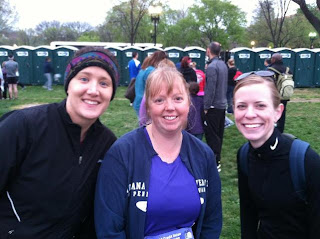 Once in my corral with Becca and Zack I look over my shoulder and there he was.. 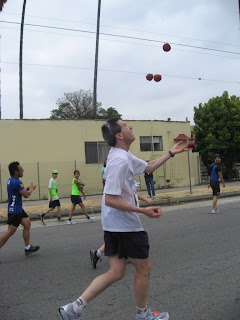 the juggler!!
I just saw him in my half in March..I was hoping not to see him during this race.  I feel like he mocks me and the fact that 10 miles is so easy to him that he has to juggle to make it challenging..Curses juggler!!!  Although it took him til mile 7 to pass me..so I guess that is good.  Although I knew when he was behind me because there was a school of rock singing and the lead singer sort of stopped and went "oh my god, look at that"..yeah juggler..grrr...
Enough of the juggler..as you know I have not been logging the needed miles.  So today I was running, just to run.  No garmin, no time worries.  Just run.  Well turns out I had a pretty good run.  This is one of the few runs that I can say I started off on my own pace..not trying to pass or keep up with anyone.  I held a pretty steady pace too.  Slow, but steady. I was pretty pleased with my run.  I did not see the beer and oreo guy at mile 8.  I think he ran out by the time I arrived.  He was on the course, I just didn't run fast enough to see him.  The run was great.  The day was great, a bit overcast so I didn't have to worry about sun.  I tossed my long sleeve shirt before mile 1 and was comfortable the entire run.  At mile 9 I had a cramp in my quad.  Really?!  Mile 9..you couldn't hold out another mile Mr. Quad??    I ran up the last hill to the finish (which is a big deal..I hate hills) and ended up PR'ing by a minute.  Not bad for a race I was just running and wasn't keeping track of time.
Thanks Cherry Blossom...this will be my final run with you and you gave me a pretty good run. :)﻿
Posted by Running Librarian at 8:22 PM

congrats on your pr! (and maybe one more cherry blossom run?! haha!)

Congrats on your PR! Always exciting when you are just out to enjoy the run and that happens!

Awe Yay!! How awesome! Love when the plan is to just do it and have fun and it turns out to be one of the better runs!! Good for you!

How funny! I JUST read about the juggler today, I didn't know he existed! Cool that you got to see him!
Congrats on your PR!