This past weekend was the Hatfield & McCoy Half Marathon/Marathon...I of course did the half.  This half is located in the mountains of West Virginia/Kentucky.

On Friday Becky, Megan and I took off towards the mountains of West Virginia.  We were off on our running adventure.  Eight hours later we would drive into Belfry High School for the pasta dinner.  It was my first ever pasta dinner.  I usually do not eat pasta the night before a race, but since it was included in my race ticket and it looked like it was fun...pasta dinner it was!  We made sure to stop at a very nice diner to have a burger so I could get my protein in before race morning.
We rolled into South Williamson, KY sometime after 5 PM and decided that we should drive the course to see what it looked like.  I also like to be able to picture where I am on the course and hoped that this would help.  We were going to run up Blackberry Mountain and I really wanted to see how much I would be swearing the next day. 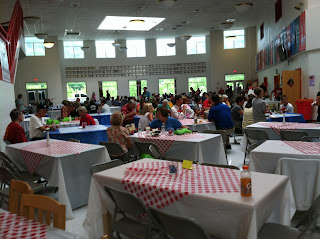 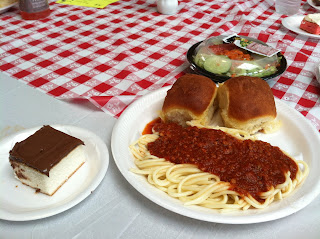 This was the first interaction with the very friendly people of Goody, Ky.  Everyone was super friendly.  When we got our pasta plate one of the high school kids asked if she could carry our dessert and drink to our table.  How friendly and nice!  We even got our picture with Hatfield and McCoy!  Becky and I were running as part of the McCoy family and Megan was a Hatfield..but don't worry...no feudin' just runnin'!

After we shoved down our pasta we headed to the auditorium.  We didn't want to miss the door prizes and the play explaining the feud!  Really how many times do you get a skit included in the price of your race entry??

I was loving life right now!  Skits and door prizes...I couldn't wait to take it all in!

David Hatfield talked about the race and how it was growing every year.  This year the race was pushing 1000 runners along with the first ever wheelchair event.  Those hand cyclist were fast!  I believe they finished the full before I finished my half.  Over 40 states were represented along with a few runners from Canada.  I could see why..great friendly race atmosphere!  David also told us that tomorrow their was a kids fun 100 yd dash that any kid could run.  If they ran the 100 yd dash they would get a free shirt and a trophy at no cost to the kids.  They are trying to encourage healthy active kids.  I thought that was great!

Next is the door prizes.  Our area seemed to be getting hit a lot.  People in back and in front of us were popping up as winners.  David was just calling number after number.  Surely one of the three of us will win something.  Towards the end it  happens..I hear my number.  I jump up and run up front.  I was running like I just hit the lottery!  I love winning door prizes! 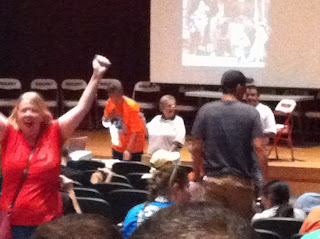 If you ever win a door prize you must get super excited like you have just won a million dollars.  That is what makes it so much fun. 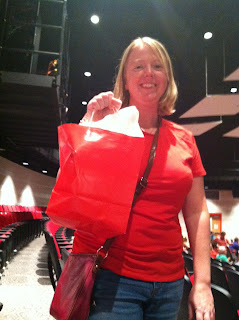 Hmm..wonder what is in the bag.  I could have taken a lovely camo hat..but I decided to go with the mystery bag. 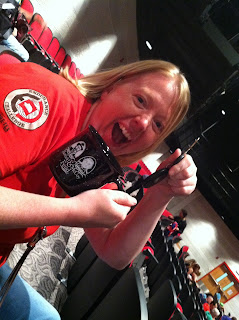 And the bag paid off!  I won a great Hatfield & McCoy mug and a used car!!  I've never won a used car!  Don't worry I knew that the car was not included with the bag.  I'm sure one of the nice ladies handing out the bags dropped their keys.  I headed out to return the car keys.  It was nice thinking I won a car though.  :)  Later we met Sue who was very grateful that we returned her car keys.  She looked in some of the bags but didn't find her keys.

Well after the raffle, we decided to head out to find our hotel.  We were staying at the Holiday Inn Express in the next town, about 30 minutes away.  When we got to the hotel the girl at the front desk asked if we were runners.  Why yes we are.  She gave us each a goody bag to welcome us to the race.  They also had some snacks in our room and will have breakfast starting at 4 am.  How nice!  Thank you! 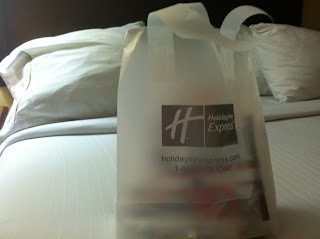 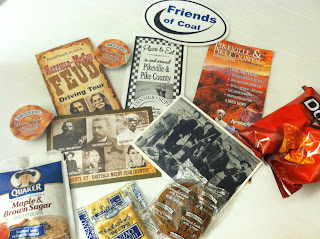 Our goody bag had oatmeal, oatmeal creme pie (yumm), chips, postcards, pb and some literature about the area.  How nice!  We all settled into our room and prepared for an early wake up for the race the next day.

Next up:  Race Day
Posted by Running Librarian at 7:38 AM

Awesome Fun! Thanks for the re-cap so far. I love that you almost won a new car! I hope you told Sue she really should have included the year, make, model, and color of the car so you could find it better in the parking lot :)

Wow - sounds like a great pre-race day!!! Love that you won a door prize (even if it wasn't actually a car). And, next time I win a door prize I'm going to try your method - much more fun!!!
Can't wait to read the rest of the recap!!

What a FUN race!!! I love that they had a skit the night before! Congrats on a door prize, too...with or without the used car! :0)

I'm so glad you enjoyed my hometown! Can't wait to read your recap on the actual race. :)