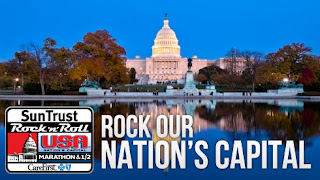 After paying for 2 halves in the past 48 hours I think that will be it for awhile on the half marathon front.  First off I think Megan is going to start to disown me as a friend if I nudge her toward any more running events.   We still have some 5K sprinkled in among the bigger races.  I am going to run the 9/11 run in DC since this is becoming an annual run for me.  Along with the Will Run for Chocolate run in Dec. (I get to finally check of Maryland) and the Love the Run your with in February.  I also need to squeeze in a 5k (maybe a turkey trot) for the Girls Run with Pride group at school.  I haven't even started to look at that projected schedule.  I feel like I have ran a lot more races this year or rather this upcoming year.  I might have to sit down and figure that one out.
Posted by Running Librarian at 2:07 PM

Not crazy! I'm debating this half as well! I'm running Philly in November, then I HOPE to run NYC in March...but the lottery is tough. If I don't get into NYC, then I will probably run DC :-)
(@100CalsPerMile)

I'd love to run a Rock N' Roll race because I've heard great things, but they are so expensive! You got a great deal on that half!! (I like your logic because that means I ran in the Inaugural Goodlife Victoria Marathon last year).

my hubby did KY Derby half this past spring and loved it. I think i might be doing it this year!