Last week I headed back home to PA to visit my family.  It was unseasonably cool for August.  I had my half marathon in Erie on Saturday.  I brought my running clothes thinking I hope I run but I usually hate running at home.  Well I did get in a few miles on Wednesday.  That is a few miles more than I normally get in when visiting family.

Mom was coming to with me to cheer me on.  This would be her first race that she has seen me run.  Both her and my step-dad do not understand the running races thing.  My step-dad will often ask if I won or if people at my run club win.  Ummm..there is only one person who comes in first. And in the big races they usually are paid to run. I tried explaining the age group win, but I don't think they truly get it.  I also tried to explain the I am really running against my own time and myself.  They don't get it. I have come to the realization that it is ok that they don't get what I enjoy doing.  I was happy that Mom was coming to cheer me on.

When we got up to Erie on Friday we headed over to Presque Isle to look at the course and see where we would be parking.  I had flashbacks of the Hot Chocolate Race because there was only one way in and out.  Parking looked like it could be a problem too..so I knew we were getting up really early to make sure we didn't get stuck in traffic trying to get into the park. 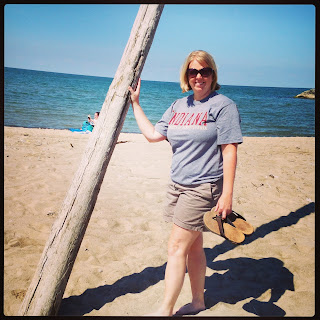 The course looked really flat.  The weather for race morning looked cool but perfect running weather and the course was under trees for most of the way.  I don't think I could ask for more perfect running conditions.

After checking out the course we headed over to the convention center for packet pick up.  We were standing in line to sign the waiver.  Yeah I have never had to do more than check the waiver box for races, but The Biggest Loser had us all sign another waiver..I hope I didn't just sign away an arm or a leg!!  While I was standing in line I told Mom to head on into the expo because Pam from the Biggest Loser was there and she could stand in line to have her picture taken with her.  Well when I got done with the waiver I found my giddy Mom.  She was like a kid at Christmas because she got her picture taken with Pam.  She was so excited that when Pam asked her what she was running she told her the half marathon.  Oh Mom!  I picked up the shirt and got my pic with Pam too. 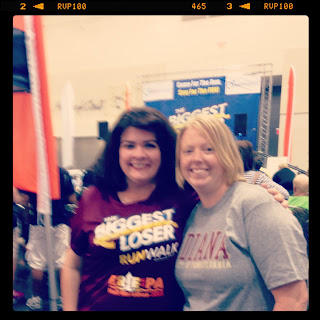 Disclaimer:  Mom is not good with using the iphone..she makes most of the pictures very blurry.

After picking up my packet and getting our picture with Pam we headed back to find some food and the Casino.  We ended up grabbing some food at the casino and then played some slots.  I didn't eat my normal steak or hamburger pre-race meal.  Mom is not the most adventurous in finding food and didn't want to drive around to find something to eat since we were both starving. So casino buffet was it.  It was ok..I was starving so it was food.  We played the slots for a few hours.  I ended up walking away with thirty dollars more than I walked in with.  So that was fun!  That never happens to me..so I took that as a good sign the the run tomorrow was going to be great!

We headed back to the hotel and I got a shower and prepared for my early morning wake up call of 4:30. 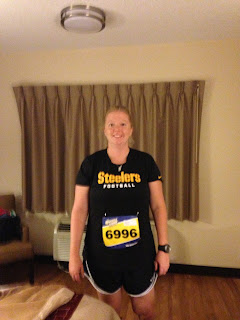 I slept in my running clothes so it didn't take long to get ready in the morning and then we were off before 5 am.  We found parking with no problem and I am glad we came so early because when we took off running people were walking to the start from parking their car far away around the park.  We had front row parking!


As I was waiting for the race to start I looked up and saw my high school friend Stacy's little sister and mom in the corral waiting too.  It was great seeing Trisha and Dottie.  I moved up and we chatted a bit.  They held the race start by at least 15 minutes trying to give some of the people who had to park a distance away to get to the start.

When we finally took off I was a bit nervous.  My training run from the week before was rough.  It just down right sucked.  I had the slowest ten mile run that I ever ran.  I had to walk a bunch because of the heat...it just sucked.  I was hoping that this race was not going to be a repeat.  We headed off around the loop of the park.  It was really quiet..not a lot of cheering.  Most people were at the start.  We did have these nice parents that were riding their bike along with us and would tell us what mile we were near as they cheered us on and waited for their daughter to run by. The Biggest Loser was great about water stops.  They had water at every mile.  I thought that was great since it was a summer race (normally not as cool as it was last weekend) and they are trying to encourage new runners who might be running or walking their first race.

I was having a pretty good run..up until mile ten.  Ugh..I was actually having a great run till mile ten.  I'm not sure what happened at mile ten.  I suddenly ran out of gas.  Oh if only I was running a ten mile race..it would have been great..but no it is a half and now I have no energy for the last three miles.  Ugh...I ran the first ten and walked most of the last three..what is wrong with that picture??  I am going to blame the previous nights dinner on my lack of gas in the tank.  I really do need protein before a run!

I rounded the corner and saw my mom and waved.  She waved back and then suddenly realized she could take a picture..well she is not the fastest with the iphone..so no picture from mom. :)  The Biggest Loser took some pictures as I was coming down the stretch but they are not up yet.

I didn't have my best time but I didn't have my worst time. If I would have ran that last three miles I might have been able to PR...oh well I guess I can always hope for a PR next race.  Mom said that she had a good time and would like to come to another race.  So that is good.  I was worried about her sitting there and getting bored.  She was shocked at the fact that the first guy finished in 1 hour and 15 mins or something like that..yeah there are some fast people out there.  I don't think she understand much more about running races or why I love race day, but she did see that it is a fun atmosphere where everyone supports everyone no matter the speed.  Maybe she will come to another race to cheer me on..we will see.

All in all I thought the Biggest Loser Half was pretty nice.  I wish there were more people cheering on the actual course, but who can argue with shade, cool and flat?

Posted by Running Librarian at 9:45 PM

Oh my gosh, I love everything about this post! I love Presque Isle! I went to college just south of Erie in Meadville (ugh) so Presque Isle was like this amazing place to go to feel like we were far, far away. And I LOVE your running outfit. Too bad the Steelers are in their pre-season rut right now. And the Biggest Loser is the best TV show out there. Pam was a trip on the show, hope she had the same spunk in real life!

Amy, Pam was just as crazy as she was on TV. You would have thought she was best friends with every runner running lol. Jackie and Dan were there too..Jackie really looked good as did Dan. Dan sang with his band..he sounded really good :) It was a great run.

I actually wish more races would adopt the water at every mile thing. It would keep me from having to keep a water bottle with me :)! I am such a nervous nancy that I am going to get dehydrated.

You are a half marathon machine this Fall! Get it girl!!

We should introduce your mom to my mom. They can discuss not "getting" running, hatred for the iPhone and maybe have a meal at a safe, bland restaurant together. It's almost hard to laugh because I'll probably be right there with the technology and food thing one day too. Congrats on finishing another one!

Great job on another half!! I think I'm going to run the BL half this fall. I can't wait to meet the 'celebrities'. :)
Sorry you ran out of gas at mile 10. I ran a half a couple weeks ago and was disappointed I didn't PR, but someone told me you can't PR every race, so just remember that! Congrats girl!