Sad to think in a few more weeks my summer is over and back to work I go. I know I'm pretty lucky to have the time off. I do realize that some people actually work during the summer (how do they do that?). It doesn't make it easier to head back to work. So for now I will not think about that.
I am officially done teaching summer school. I had some really nice kids so it wasn't hard to head to work. To celebrate the start of my summer I got a lovely head cold. It sucks to have a cold, but to get a cold in the summer really sucks. So for most of the weekend I felt like crap and didn't move much. I did head out to a painting class with some work friends on Saturday night. 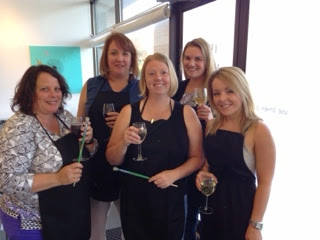 We were given the instructions on how to recreate starry nights but in dc. 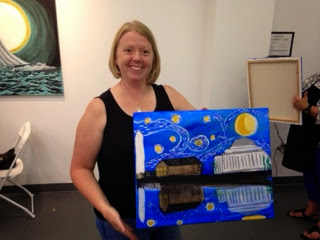 The barn like building should be a museum and not a place to store your horse while you tour the mall. It was a fun night but I was ready to head home and sleep. (Sure sign of not feeling wll).
Then on Sunday I was hoping to get a long run in. I couldn't breathe and had no energy so I quickly knew it just wasn't going to happen. I had a few days of doing a lot if nothing. I caught up on some reading and shows on tv. Not a fun start to my summer.
Tuesday morning I woke up and headed out for a run.  It was a beautiful morning high 60's and no humidity. You couldn't ask for a better running day. I headed over to the library to park my car. I scouted out a new running route the day before. It is always exciting to run in a new area.  I headed out to see how many miles I could get in. I heard that running loosens up a head cold but didn't know if I believed it. Well turns out it might have helped a bit. Rather than being stuffed up I had the opposite problem during my run. I was able to knock out five miles. Not whatI was shooting for but I'll take it. 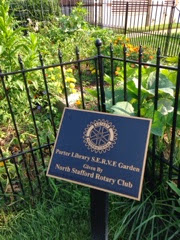 I discovered the library has a veggie garden. Who knew?!
Afterwards I stopped to get a dunkin donut to celebrate my five miles. 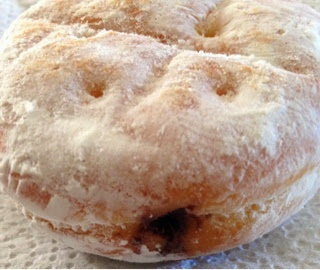 Chocolate cream filled. My favorite!
I still have three more miles to run at run club tonight. Bring it on.
Posted by Running Librarian at 2:41 PM

Oh - you are right - summer colds are the worst!! I hope you feel better soon and can enjoy your time off!!!

What is with the summer colds? I started off the summer with one too. Hope you feel better soon. I'm beginning to feel like I'm the only person I know who hasn't taken one of those painting classes! In fact, I was kind of hurt when some friends posted pics of theirs on Facebook and didn't invite me to go with them. It really seems the trendy thing to do right now. Your painting is great!