Well I know this will come as a shock but I've been running...some. It hasn't been long distances but it is a start. Last week I went to run club and it was rough. The heat about killed me. I then knew that I needed to get back into running.  So I went out and ran the neighborhood the next three days. I quickly realized that it is too hot to run after 9 am and I will be working on getting up earlier to get my runs in.

At run club Brad  was talking about a live band karaoke on Thursdays. Since I have no work some of us decided why not head over on Thursday. And the band had a gong when someone was really bad. And really I feel like that is the best karaoke, bad singing. And add a live band and a gong and it sounded fun to me. 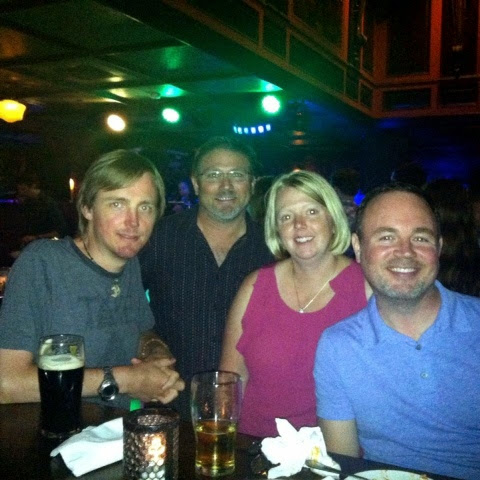 Lots of fun with running friends. Turned out they never used the gong while we were there. Boo!  The people were very good singers, which meant I did not sing. I'm sure I would have gotten the gong for sure.
Friday I ended up running a few miles and not going to kettlebell class. Ryan, our instructor totally called me out on canceling too. I promised to show up on Monday. Sometimes you just need someone to remind you to get moving.
Monday I went back to kettlebell class after a few weeks off. I did lots of squats and lifting heavy things over my head. Today my legs and abs hurt. I guess I shouldn't take a few weeks off again.
Tuesday I headed to a very hot run club. The sweat was crazy! I'm going to try and run this evening..but between the heat and my legs it may turn into a Thursday run followed by nighttime kettlebell.

So looks like I'm back into running!
Posted by Running Librarian at 1:27 PM

Hooray for being back to running!!
I love karaoke places - I rarely sing (unless I've consumed too many beverages!!) but I like to watch other people!

Woohoo. Boy is it hot, but it feels so good post run to have finished it.