This morning Megan and I ran the Cupid 5K.  I have never ran this race and it was pretty good for a small race in February.  There were families running and people all decked out in Valentines wear.  We each got a lovely heart headband to wear.  I broke out the tutu for this run. There is only a few runs that you can justify a tutu and Valentine's Day runs are one of those that scream for a tutu. 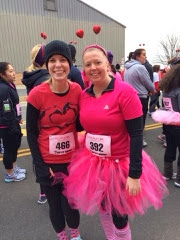 We started out and if you got behind people that were slow there was not a lot of room to run around them.  The race was on a lot of sidewalks.  I did pass some people and got stuck behind some more people.  Around the half way point I almost had to leap frog over a kid who dropped his glove and stopped to pick it up.  Luckily I have reflexes like a cat and I was able to go around him in the grass.  Unfortunately I do not always have control of my running shoes.  Five feet after my reflexes saved a small child I ended up biting the dust.  I am not sure what happened.  I was being pretty careful with uneven sidewalks.  I am not even sure if the sidewalk that I suddenly was rolling over was uneven.  All I know is I went down pretty quickly.  But my cat like reflexes were there and I was able to roll out of the runners way.  Tuck and roll people!  The nice dad to the kid I just  barely missed helped me up and I was off and running in a few seconds.  No blood.  My hand hurt a bit where it made contact with the sidewalk but no harm done.  I was like a ninja with my moves though. I am sure that the dad was impressed with my quickness and my ability to shake it off.

We were almost to the end and someone else bit the dust right behind me.  I turned around to make sure she was alright.  Looked like she might have jammed her shoulder or arm because that is what she was holding. I picked up her keys and there were about five of us asking if she needed help.  Her friend was with her and looked like things were under control so I continued on my way.  Someone must have said something to a volunteer because he was walking towards the fallen runner when I turned the corner.

I finished and enjoyed some hot chocolate after the race.  Megan and I had to find some place for some post race french toast.  This one had pecans and strawberries on it.  Yummm!!!  Turns out that I PR'd today!  I took one second off of my best time (which happens to be my very first 5K in 2008!  Yeah you can see how I work on improving my 5K time :)  I am sure it would have been a better PR if I didn't fall or head back to help the other fallen runner.  Pretty happy since I didn't even think I had PR'd in the first place!

We noticed that there seemed to be some sort of camping event going on near the race. Turns out Nike was realeasing some new shoes. 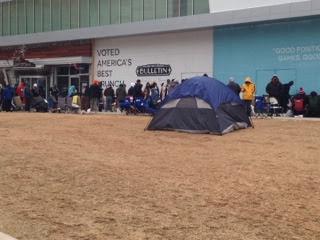 A small store selling the newly release Nike shoes were letting in a few people in at a time.  I don't think there are any shoes that I would camp out for..I know there are no shoes I would camp out in the winter for!  Well I hope everyone was able to find the shoe they wanted in their size.

Posted by Running Librarian at 1:32 PM

Glad your quick reflexes saved the kid ad that you were able to tuck and roll out of that fall so no one fell on top of you!!
And, all that + a PR?! You rock!!

Yikes! Sounds like a crazy race!
I can't believe I waited around four hours for Disney shoes. I wouldn't do that again. No WAY would I camp out for them!
Congrats on the race!

Awesome job on the PR! I'm glad you were ok after that fall. I love your tutu!!

Ahh! Falling during a race is such a fear of mine!

Last week during a training run, one of my girlfriends took a tumble and she literally tuck and rolled too.

Congrats on the PR!!