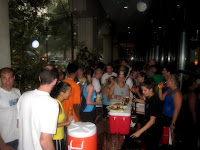 So last night I headed out to run with the Shirlington Running Club.  Love running with them..ok, not sure if it is the run or the socializing and beer afterwards that I really like.  Yeah I like the beer and socializing afterwards more than the run.  This Tuesday was our last time at Cap City Brewery, next week we move down to a new restaurant for happy hour.  I guess we were getting too big for Cap City.  The new place has organic beer, hope it is good.  Next week we also start the new run route.  Hope I like it.  Right now the run through the forest (ok it is a park, but I like to refer to it as the forest..makes it sound larger than it is) is getting pretty dark and scary.  I might even have to go out and invest in a headlamp to run in.  But not sure about that yet.  The new route is along a pretty well lit bike/run path so I am hoping I won't really need one.  We will see.
Hung around until 10 talking and having a few beers.  We didn't realize the time so we quickly said bye and we were off to home.  Wouldn't you know it that was the time when an accident was slowing traffic on 95.  So an hour later I pull into my house.  The only thing I don't like about the running club is that it is on a Tuesday, which sometimes makes for a really tiring Wednesday.  But it is worth it for the run and the socializing with other people who are not teachers. :)  I mean don't get me wrong, I love hanging out with all my teacher friends and talking about school stuff, but it is really nice to be among other people and hear about their jobs and life. :)
The scale is still broken.  Although I really haven't followed through on my plan.  I am heading out to the gym tonight though :)  Happy Running all.
Posted by Running Librarian at 5:44 PM

My running club meets 3 x a week but I go on Thursdays. I think its also the beer and pizza that draws me to them. haha! just kidding =)

Oh, man, I really need to find a running club around where I live! So jealous! :o)

Gosh, wish we had a running club like that here! Maybe I should start something... in the spring after the snow melts, of course.

Yes, it's nice sometimes to hang out with people other than your co-workers!

Sounds like fun, the running group that is. I don't like beer :) I really need to find myself a group to run with.