So last Friday I had my New Kids On The Block Concert.  I got home at 12:30, took  a shower and I was in bed by 1 am.  At 3 am. the alarm went off, I took Riley out and had some "breakfast".  Not sure if it can be called breakfast or a midnight snack when it happens at 3:15 am.  I was out the door after that and headed to Megan's house to then head over to Great Falls to meet the crew volunteering for the local Northface endurance race.  I guess it was a good thing that we were meeting at Megan's because her alarms did not go off.  So my phone call at 4am say "I'm here!!" was the wake up call she was looking for.  Becky arrived shortly after and by 4:15 we were off hating life and wondering why we ever agreed to volunteer for  a race that lasts all day.

When we got to Great Falls we saw the 50 mile runners starting off with their headlamps on. 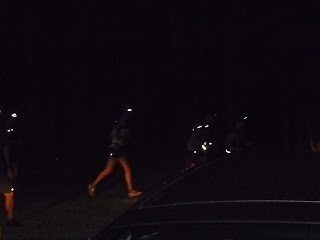 We meet up with everyone and then head out to our aid station.  Once there Northface Brett doles out the jobs.  Looks like Megan and I will be keeping track of the 50k runners as they head in to the 7 mile loop.  Becky is paired with Whitaker and they are in charge of the marathon.  The 50K runners will not start to show up until around 9am.  So we are the cheering squad until our runners show up.  We help set up the aid station with food and drink.

It was really fun cheering on all the runners and talking to their family members that were waiting.  Once Becky realized that their names were on their bibs...she really enjoyed freaking them out cheering them on by name.  It was a little nerve racking trying to keep track of everyone's numbers. 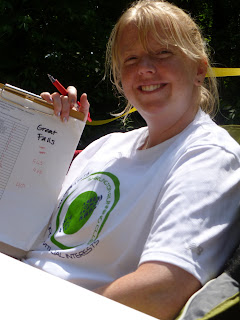 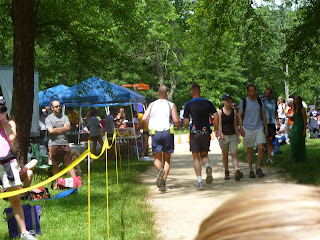 It was a great day to volunteer.  I was amazed at how relaxed the runners appeared to be.  I didn't see many people that looked to be hurting too badly.  I know if I was running that distance I would look like I was dying.  I loved seeing all the families there too.  It really takes a family to commit to running such a long distance. So many families brought coolers of food, change of clothes or shoes for their runner.  I will never run a crazy distance like 50 miles, but I would definitely volunteer again.
Posted by Running Librarian at 1:36 PM