So yesterday we headed over to Great Falls, VA to get our volunteering on.  This is our second year volunteering at The North Face Endurance Challenge.  I'm always in awe of the people and families that run such long distances.  It really is a family running thing..I've seen more parents, spouses, kids and friends hanging out all day and so concerned about getting everything ready for their runner, making sure that they didn't miss them because they are going to need (Gatorade, new socks, clean shoes, pb&j sandwich..etc).  It truly is a team effort running these kinds of races.

I got up at 2:45am to make it to Megan's place by 4 am. and then we were on the road and headed to Great Falls by 5 am.  Ugh..I don't get up that early to go to my own races!  We got there at 5 and met up with other run club volunteers.  I look over and I spy my running crush... 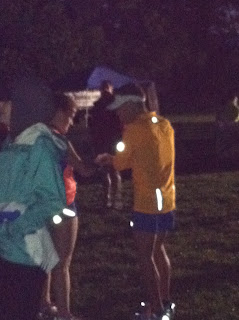 Dean Karnazes a.k.a. Karno!  I start to get giddy..not sure if it because I have spotted my running crush or if it is because I'm lacking sleep from getting up so early.  He looks much shorter than what I had imagined him..but that doesn't bother me..when it is love, it is love.  He says a few words to all of the 50 milers and sends them on their run.  Becky and I start to walk over to the food tent to see what type of breakfast we could scare up..wouldn't you know it we are right behind Karno!  Ah..my heart starts skipping beats..I'm so excited.  I start to stare at his huge calf muscles!  OMG!  His legs are all muscles..it is crazy!  Then I start up a little conversation about how I thought he was running and that we were going to mark his bib at mile 14.  Yeah I know how to drive the guys crazy!!  He tells us that he is just the host and not running this one.  I can tell by the look in his eyes that he is sad that he missed the chance of having me mark his bib.  I think he is starting to feel things for me...I mean it is obvious that we were meant for each other.  We are both heading to the food tent (umm hello..the universe must be telling us we were meant to be together by having us walk to the same tent...)  When he is in the tent Becky keeps telling me to ask for a picture with him.  I feel soo stupid asking for peoples picture when I don't really know them (even though we were feeling the love for each other).  But I did!! 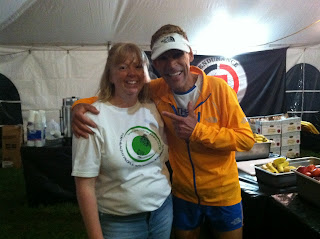 Can you see the love in his eyes for me?  See how he is pointing at me as if to say..this is the girl I have a crush on..yeah I see it too.  Also notice how tiny this man is..no fat on his body whats so ever!  I guess if all I did was run run run I would be missing some of my fat too.
So I was giddy over meeting my running crush for sometime yesterday.  Sorry Karno..if you weren't married we could be together..
Well the entire day wasn't really about me stalking hanging out with Karno.  I did come to volunteer.  We left the start line for the Great Falls park to set up our super busy aid station.  Becky and I were in charge of keeping track of all of the 50 miler and 50K runners.  Doesn't sound hard at all.  The 50 milers were great.  They were in no big hurry.  So when they got to us and Becky was yelling out stop so I can mark your bib I had time to write down their numbers so we made sure we didn't lose any runners from aid station to aid station.  The 50K people were another story.  They came in large groups at the beginning..running us over.  They did not want to stop to have their bib marked (no mark on your bib..no qualifying time).  But we got through that fine.  It was funny that most of the 50K'ers would put their hands up as if Becky was attempting to rob them.  We got a kick out of it, as did some of the spectators watching.  It was a great day..not too hot and not too cold.  It rained like crazy the day before so those poor runners had mud caked all over themselves. I felt bad. 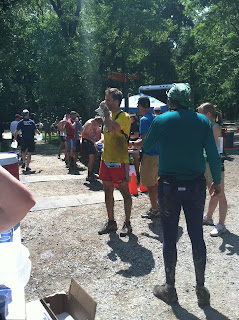 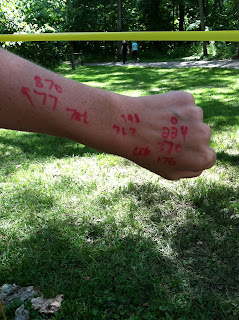 This is what happens when you are chasing people down..you must write some numbers on your hand. 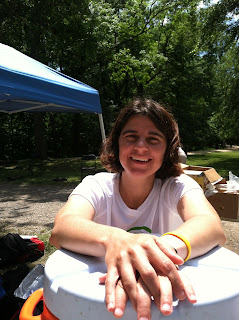 It was a long tiring day volunteering.  But so much fun cheering on some great runners!  Amazing the distances that some people can  run!
Posted by Running Librarian at 1:12 PM

Wow! That's so cool you got to meet "Karno"! I can definitely see the love!