My what strong toes you must have..Navy Air Force Half in review

This past weekend I ran the Navy-Air Force Half Marathon.  It was a great day for a run.  Perfect weather..just beautiful.  But before I run the race, I must pick up the packet.  On Saturday Megan and I decided to head to packet pickup early so we could have lunch at the Metro 29 Diner. 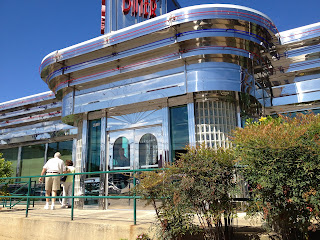 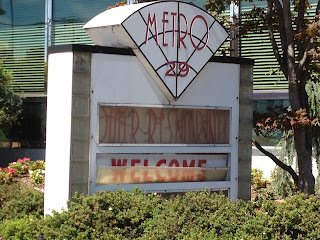 I was watching Diners, Drive Ins and Dives the other week and saw an episode on Metro 29 with some yummy looking french toast.  Well turns out it is located in Arlington and since we have a race to run and we always have french toast after running this seemed perfect!  Since I couldn't go out for brunch after the race (I had to high tail it to Baltimore to pick up the parents from their cruise) we decided we couldn't let the weekend happen without french toast, so we ate it on Saturday.  This french toast was everything that Guy Fieri told me it would be and more.. 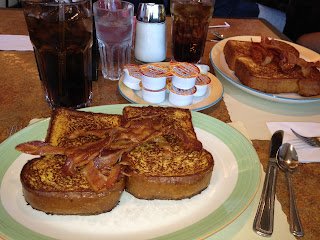 First check out all of the bacon that they give you.  Normally it is 2 maybe 3 strips..nope they layer it on.  And the french toast is as big as your head and at least an inch or more in thickness.  It is pure heaven.  Thank you Guy for letting me in on this little secret.  Oh did I mention that the challah bread is homemade..oh yeah ..so good.  Needless to say this is not our last visit to Metro 29.
Now that we had our french toast fix for the weekend we were ready to run on Sunday.  We woke up and met at the metro.  While on the metro Megan figured out that she dropped her keys and turns out she was right, they were right outside of her car door.  She ended up getting off the metro heading back to her car and then back on the metro to the race.  We ran into each other as she was running past me a few miles into the race.  I continued on to the race and found Gary from run club. 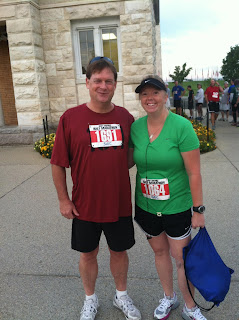 I had just enough time to check my bag after this and then head to the start.  As it turned out I was running without my handheld water bottle and gu.  I accidentally checked them with my bag.  Luckily it was a nice cool overcast sort of day, so I wasn't too worried.  I was a bit worried about no gu, but I figured I will just stop at the Gatorade stops along the course.  I had a great run.  I liked the fact that it was a small inaugural race.  I also enjoyed running through a different part of DC.  I also noticed that when the fast runners who were running the 5 miler past me, the top guys didin't run on their forefoot..they ran on their toes!  My what strong toes those guys must have.  Wonder if they do toe push ups or maybe have little weights for their toes to lift.  I now know why I am so slow, I am not a toe runner! 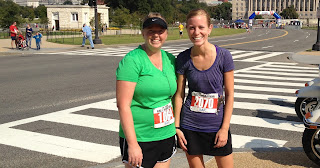 Turned out to be my second fastest time.  If I would have ran the last mile instead of hating life and walk/running I could have PR'd..oh well maybe next time.  Amazing how much the weather plays a part of how you run on race day.
Posted by Running Librarian at 6:47 PM

Email ThisBlogThis!Share to TwitterShare to FacebookShare to Pinterest
Labels: DC, half marathon

Better work on those toes! Great job, glad the French toast was all that!

I heard a lot of people got lost or took a wrong turn, glad you werne't one of them! Congrats on your race! It is amazing how much the weather effects running.

The weather plays a HUGE part. My slowest half ever was two months ago in the heat.
That French toast looks super yummy!