The night before the half Megan, Becky and myself were being good little runners and headed to bed early.  No late nights enjoying the nightlife of VA Beach,  no stopping at the outdoor concert.  We were in bed at a normal time.  Unfortunately we were not at a hotel with a bunch of good little runners.  We were in a hotel that I think was home to a preschool.  There was lots of playing up and down outside the doors of our room.  No kid free hotel for us.  At 11:00pm I wanted to turn on my teacher and ask some parents if they could either put their kids to bed or let them run around at the beach...we have a race to run early in the morning people!

Megan and Becky ended up falling asleep pretty quickly.  I did not.  I never sleep well when I travel.  I ended up tossing and turning for most of the night.  At 2:30am I heard a visitor attempting to open our door with his card key.  Now the only people trying to open the wrong door at 2:30am are usually drunk.  Needless to say we had what I would assume was a very drunk person who I think should have been two doors down attempting to open our door unsuccessfully.  He didn't like the fact that his card key would not work and so started knocking, pounding, and throwing things and bodies at the door.  (well it may not have been bodies..but rather his body)  I ended up calling the front desk and they took care of our confused neighbor. Becky was not happy with our new friend at all and had a hard time falling back asleep.

The resin evidence left in front of our door in the morning... 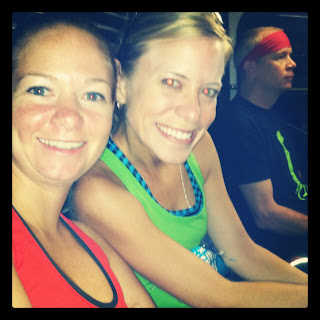 You can not even tell that Megan and Becky had their sleep interrupted before the 5am alarm went off.  We headed out of our door and caught the shuttle which was located directly in front of our hotel.  Sweet!  We were not really sure how the shuttle would work.  So we left extra time just in case we had to make a lot of stops before they dropped us off.  It took us directly to the start line without any other stops along the way. 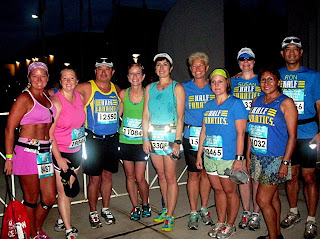 Megan and I got to be in our first Half Fanatic photo!  So great to meet other Half Fanatics.
When we headed out the door the humidity at 5:30 am was horrible.  Unfortunately it did not improve as the day went on.  When you feel like you have to cut the air with a knife just to breathe you know it is not going to be a fun run.  When we started running I thought I may die.  The heat and humidity was horrible!  I knew it was going to be a rough run.  I felt tired (probably from my neighbor wanting to meet us at 2:30am).  It was not going to be my greatest run.  I did stay ahead of my goal pacer until mile 6 or 7.  So that was making me feel good.  I also got to see my friend Kristi and my favorite nieces.  They made signs for me and gave me a hug to help my keep going.  It was great seeing them at mile 6.
At a water stop (I'm going to guess 7 or 8) I ended up running into Sarah who I ended up running near when running the Leesburg 20K.  Luckily I wore the same pink tank so I guess I was pretty easy to spot. :)  It was great seeing a familiar face at a water stop.  Sarah unfortunately had some bad blisters forming on her feet so she had more than just the heat to deal with.
I ended up walking from mile 7or 8.  It was just too miserable to run.  Every medic station had multiple people needing help.  I saw a bunch of people getting medical attention along the side of the road.  The heat was nothing you wanted to mess with.  I did go through every hose that the course offered to attempt to cool down.  I was also thinking of heading to someones front yard to use their slip n' slide, but I decided against that one.   Although I think the guys there would have let me.
I ended up finishing with a new PW.  Yep my personal worst time is officially RnR Va Beach! 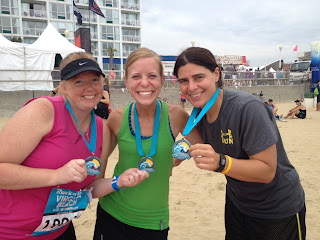 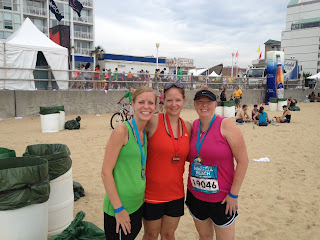 Becky was taking care of us after she finished her 5K. 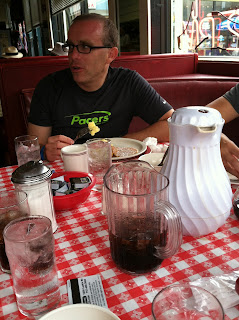 As always it is tradition to head out for some breakfast food.  This place had a great buffet with some yummy french toast.  I think french toast has some special recovery powers!
It was a great weekend for a run even though I ended up with a PW.
Posted by Running Librarian at 9:14 PM

It's not a personal worst because you still finished! You went out there and did what you had set to do. Could've it have been faster? Yes, but you'd probably be recovering in the hospital from heat stroke right now. You roughed it out and went a lot further than other people out there. You rocked that race, Pam! And your next one is going to be even better!!

Amen! I agree! You went out and you did it and you were also cautious of the weather. I'm coming up on my first half marathon Sept 15 and I hope the weather is on my side...if not then I will do what I can do. Way to go Pam!

I hear you on that humidity, it was awful! I ran it but I did the 1st leg of the relay. I was so happy to be done with battling the humidity with 8 miles. Great job on finishing the race.

Thanks everyone! Kimmy good luck on your first half!

ha! it was miserable! thankfully, we lived to tell the tale! let's keep our fingers crossed fall hits dc before next weekend! (hello, mother nature, are you listening?!...)

I'm always extra cautious and slower when it's hot out for a race. There's no reason to get hauled off on a stretcher for 13.1 silly miles! Congrats on your finish, hope you had a fun weekend!