a bit crazy and the Marine Corps Marathon

I think I must have fallen and bumped my head last week.  Or maybe I have gone a bit crazy.. I have signed up for my first full marathon!


Yep I will be running the Marine Corps Marathon as my first full marathon.  I have been trying to decide if this is a good thing or if I might be just a bit nuts.  I have said that I would never run a full.  I have said that there is no way I would go from 13.1 to 26.2.  But I guess something has been slowly changing.  A few months ago I would still say hell no! to 26.2..but in the back of my mind a little voice would say "don't say never.."  then it would start to say "maybe you should see if you can do a full".  "How will you know that you can or can't run it until you try"... I may have to strangle that voice after October 27th!

I have been following all of the excitement with registration.  I have a few friends that were going to try and register.  So I saw everyone's posts about the horrible problems with registration.  And then I thought..next year I'm going to try and run a full.  Next year I will see if I can get into MCM.  Then I got a facebook post from my friend Keith asking if I am running it.  Umm..no I don't think so. I  will be there with pb cups for you though.  He said ok, but he could hook me up with a charity bib.  That was it.  The end of the conversation.  Normally that would be it, I move on and look forward to cheering everyone on.

But that wasn't it.  It just stuck in the back of my mind.  Maybe I should just try to run it this year.  I could raise some money for Fisher House, which is a great charity that supports our troops and their family during a difficulty time.

While on my way home to Pennsylvania I talked myself into running my first full this year.  I thought about how it would fit into my schedule.  I have two half marathons in Aug and Sept. so it is not like I am just being lazy during the summer..sure I've never ran 26.2 miles but I didn't think I could run a 5k, or a half marathon either.  I will never know if I can run 26.2 until I try.  I may not be very fast but I can put the work in and train over the hot hot summer months.  Ugh...  Then I thought how excited Megan was to run her first MCM.   She was glowing at mile 23 (is that possible??)  I don't think I will be glowing, but I might be able to step up to the challenge..(well I guess I better be willing to step up to the challenge because I have signed up.)  I also thought I have just finished my 10th half marathon..how many half marathon does it take to run before your first full?  I have friends that would say zero..since they didn't run a half before their first full. (That really sounds nuts to me!)  I feel like I know a lot more about my body now than I did a few years ago when it comes to running and I am guessing I will know a bit more about myself after October 27th.  I'm still trying to wrap my head around the fact that I am actually going to run a full...

I called Keith and got the info for the charity bib.  It seems that our team will have five of us from my high school.  We will be representing class of 1993-1996 (yeah I will be the old lady of the group lol)  He told me that if I sign up he will change the team name to the Lil' Indians (our high school was Indiana High School, home of the Lil' Indians..)  Well I don't want to be the one that prohibits the name change!  Great I'm in..yikes!  So looks like I will be running 26.2 in the fall....wish me luck!

My friend Shawn sent me this text 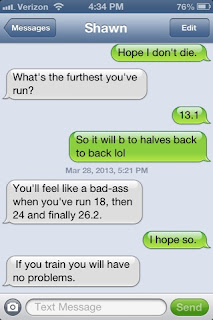 Posted by Running Librarian at 4:44 PM

Librarian on the Run said...

Awesome! I haven't run a full yet, so I am looking forward to hearing about your training. A full is something I'd like to do someday. I think it's great that you've made the step of signing up. I'm sure that really sets things in motion. Good luck with the training!

Aahhh! How exciting!! You are going to do great!

It's so exciting to be doing your first marathon. There are so many firsts that will happen between now and October. And each time you tick one off you'll feel a huge sense of achievement. I've just signed up to my second which is in October too so I'll enjoy reading about your adventures.

Hi I am new to your blog! Found you through the Happy Runner! I am going for my HF status this Saturday as I tackle my second half marathon in one week!

Way to go getting into that (via charity!). Sounds like registration was a disaster. Can't wait to follow your training!

Wow! I'd love to do MCM. One of these days. You can do it. I did two full marathons before I even considered doing a half. As long as you properly train for it, you can make it. It isn't easy, but it is a reachable goal if you believe you can do it. Congratulations on making the decision to take on 26.2!

Congratulations - very exciting!!
Neat that you will be doing it with a group of people, too! Can't wait to follow your progress!

Awe look at you!! I'm so excited for you!

I'm SO excited for you!! All of the thoughts you had before signing up, were the same things I thought too. After running my half's, I thought that was it, I was satisfied with that, no need to run a full. But, there's that little voice that says just try it!! So, I listened too, and my first full is 2.5 weeks away! I know you'll do great and I can't wait to hear all about your training! Congrats!

well glad I am not the only crazy one. lol Good luck on your first full, can't wait to read all about it!!