So the morning started off really early.  You would think that considering the race is pretty local I could sleep in a bit..but no..4:45 am I am up and about..take the dog out, eat a bagel, get all the race gear on etc.  I head out the door to get to the race by 6:30 since the race starts at 7:00.  I hate feeling like I am late and even though it is a small race (400ish people ) you never know what you will run into.  For instance last year I took a left instead of a right for the turkey trot and ended up with very little time before the race because I was a bit lost. 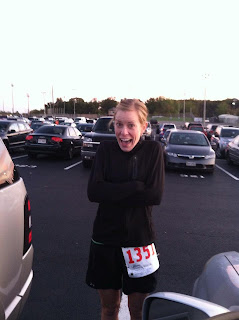 We were waiting around to start the race and it was announced that it would be 15 to 20 minutes later than the original start time until it started.  It seems that the water truck never showed up so the volunteers were all out buying water at any store that had water to be bought.  Talk about a race director's nightmare.  Well if we may have a water shortage I figured I might want to carry my handheld.  I wasn't going to carry it because they had water stops almost every 1 1/2 to 2 miles.  I wasn't sure if they were going to limit the water stops so the hand held it is.  I had some water in my car which filled the hand held half full (better than nothing I guess). 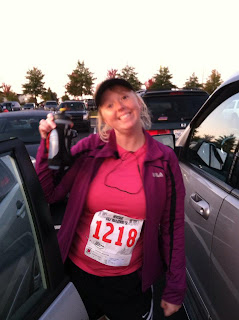 Also check out that nice running jacket.  Ah we had great times together..too bad I had to dump you before mile 2.  I thought we could reunite after the race, but it wasn't meant to be.  Someone else will experience how warm you can be when it is really really cold outside and they still want to run.  RIP Fila jacket.
Back to the beginning of the race.  We started out and I kept up with Megan for the first half mile to mile (which is pretty good because I usually drop back pretty quickly).  It was a bit cold but I quickly warmed up once I started running.  I wish I would have worn the ugly mustard color race shirt instead of my jacket.  I wasn't planning on running in the jacket, but it was really cold.  I should have put it in the car..oh well.  Next run I am taking the mustard shirt!
I was running along at a pretty decent pace.  Hit a few water stops (we would have never known there was a water shortage..all water stops were well stocked).  The first turn around occurred at around mile 3.  I got to see that I was not the last of the group (although I was in the back of the pack).  I wasn't that worried about being last, but it is always nice to see that you are not the last one.
Around mile 4-5 I got to see the winner running back.  He had a little more than 1 1/2 miles left.  He was flying!  Turns out he ran a little over a 5 minute mile for the half.  That is just crazy!
I was pleased with the limited amount of walking I was doing.  I was a bit worried for mile 8.  It seems I always feel horrible at mile 8.  Not so today.  I was feeling fine.  I wasn't running fast, but I was doing an pretty decent job of running a consistent pace. I think the cooler weather helped.  I didn't feel overheated but was very comfortable with the temps outside.    At the ten mile mark I Pr'd.  I hit ten miles at 2:01.  So close to a sub 2 hour ten.  So I was pretty hopeful of a pretty nice PR for the marathon..as long as I kept the feet moving I should be fine.  The last 2 miles of the half were tough.  I did walk quite a bit. I made it the track and ran my slow pace around it to the finish. 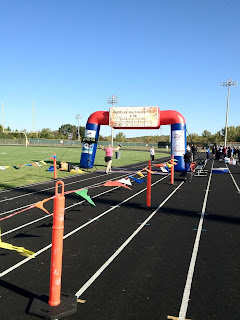 Look who I found at the finishline 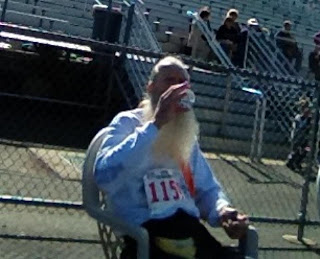 Who knew that ZZ Top was a runner!  I also saw Rodney Dangerfield during the run. I guess he had someplace to go because I didn't see him after I crossed the finish line.  Who knew so many famous people were running this small race.

I thought I was going to hate the medal.  But turns out it is huge and I love it for being so huge!  It reminds of Mr. T's bling! The medal is bigger than the entire palm of my hand! 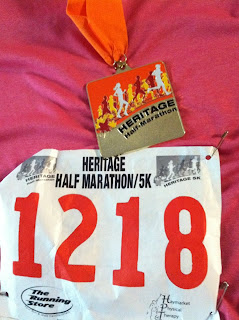 I just signed up for the Kentucky Derby mini (a half marathon) for the end of April.  I guess I have to try and beat my new best time. :)
Posted by Running Librarian at 8:13 PM

That stinks you had to ditch your jacket! I'd be bummed, but what can you do? Congratulations on the PR! That's awesome!!

congrats on the pr! boo for the jacket not waiting for you to come back though. the kentucky derby race is pretty cool - get to run through churchhill downs :) the marathon course is kinda boring but the first half is good.

Congrats on the PR. For my last (hum and only) hald, it was in the 40's. I did a super easy run/jog to warm up and it worked wonders. I was tuto give my jacket to my husband to put in the car. The other options would be: 1)if you care about it tie it around your waiste 2)go to goodwill before the race and buy a super cheap jacket.

I did try to tie it around the waist..it kept sliding down (I would have thought my butt was big enough to hold it up..guess not) I thought I would leave the jacket at my car, but turns out I didn't plan well..guess I have learned my lesson lol