Historic Half,humongous hills and Half Fanatics 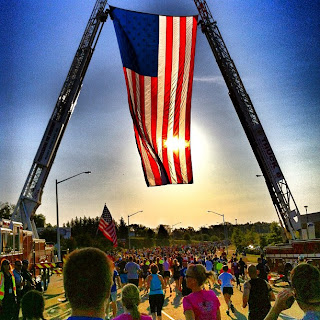 The Marine Corps Historic Half is the qualifying race for Megan and I to become Half Fanatics.  It has been a long 3 months of racing, but worth it.  Who would have thought that 20 months ago I would have ran 6 half marathons, especially since the first one was really rough.  I feel much more comfortable running 13.1 than I thought I would.  Now if only I could increase my speed.  I guess that requires following a training plan and speed work..still working on those two things :) 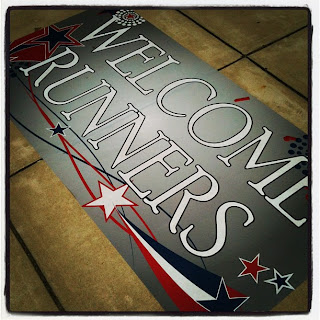 Packet pickup was very non-eventful.  I did not plan on purchasing anything, but I walked out of the place with a pilsner glass, new running sunglasses and a cool new 13.1 magnet.  Megan and I then headed to Old Town Fredericksburg to meet Sandy from run club.  She put together a little meet up with some friends from racing and facebook.  It was my first time eating.  Well eating with racers that I have never met before :)  It was great to meet new runners.  Mark and Alanna came all the way from Florida to run the race.  It was going to be Alanna's first race.  Go Alanna!! 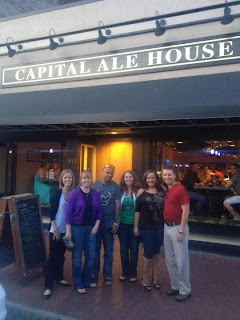 Race morning we head down 95 to Fredericksburg.  It was our friend's Bridgette's first half. She did a great job!  It was a really hilly a.k.a. mountain like race.  I hate hills.  I am pretty sure that hills hate me.  I know you shouldn't hate, but I figure since they hate me, I can hate them.  I think the first hill was mile 2 and there were more to come.  All I could think of is that this hill sucks..and the down hill portion will be an up hill at the end..ugh...
There were great people cheering on the runners.  Although I will say that some of the crowd needed a lesson on cheering.  Some were sitting, looking like they were watching paint dry.  No noises or sound coming from them at all!  Clap people, clap!
I loved the sign in a neighborhood that said "four more houses and you are at the top of the hill".  Yeah that hill sucked.  It was a lot of running up and down hills.  We did see some interesting people as we were running though. 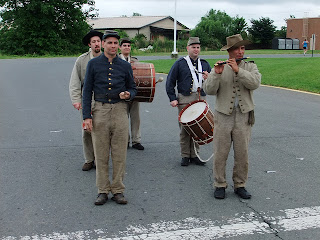 There were some historically dressed people dancing as if George Washington was arriving any minute.  It was great!  We ran through Historic Fredericksburg and we were running towards the horrid Hospital Hill.  I have read about the horrible Hospital Hill.  I drove Hospital Hill before..but I did not know... 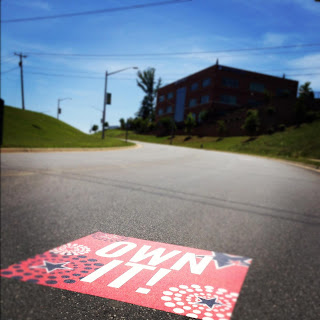 When they put "own it!" on the road on a hill..that is a bad sign.  I tried to run the down hills faster than I normally would to bank some time because I knew the odds were I would walk hospital hill.  I didn't count on all of the other hills that I also encountered, but that is ok.  If there was no hospital hill I think..actually pretty sure I would have PR'd..curses Hospital Hill!  Hospital Hill is right beside the..you guessed it..the hospital.  I believe we may have ran past the ER.  I guess if the Hill gets you, you can stop at the ER with little problems.  No ER trip for me though.
Hospital Hill killed my legs.  I was spent.  It was in the upper 70's..maybe even 80's.  I was hot and tired and hating hills...so what do I see after the monster called Hospital Hill??  Yep another hill.  What?!  Who does that?  I'm thinking it is the Marines little joke on us runners.  One killer hill after another..ugh.  So that last 5K was a lot of walking.  More walking than running.
I hit the last leg of the race.  My legs were not liking running.  The top of my leg was just killing me.  I needed to stretch it, but I didn't have time or really want to stop.  If I stopped I wasn't moving again.
So about a half mile from the finish Sue finds me.  She was a runner walking and cheering on the runners.  She sees me and says that I look like I could use some motivation.  To which I muttered yes I can.  She then took my hand and informed me that she was running me into the finish.  She continued to talk..talk about anything to distract me.  She made me continue to run when I didn't want to run anymore.  Some runs you are reminded of how great the running community is.  Sue didn't have to run me in to the finish but she did.  She left me before the finish with a task of beat the girl in front of me.  She then took my water bottle and met me at the other side.  I beat the girl :)   Couldn't have done it with out my new friend Sue.  Sue is deploying overseas.  I wish her safe travels and good luck in all she does. 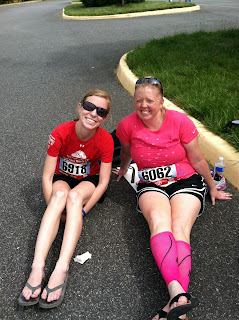 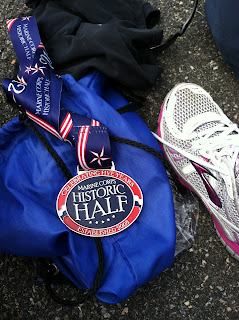 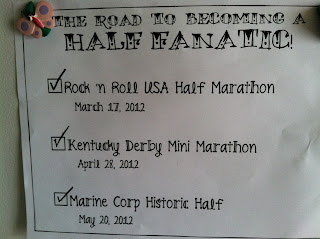 I'm officially a Half Fanatic..HF # 2430 to be exact.  We ended our road to becoming a Half Fanatic with a tough race.  Nothing too easy for me and Megan.
Here is the course...it took me a bit longer than three minutes to run it :)
Posted by Running Librarian at 8:54 PM

Email ThisBlogThis!Share to TwitterShare to FacebookShare to Pinterest
Labels: Half Fanatics, Historic Half

Thanks Pam for the motivation and great job on being a half fanatic!

Yay! We did it--we are Half Fanatics! What a great journey!

Congrats on being a Half Fanatic!!

Thanks Crystal. very excited to be a half fanatic :)