Megan and I stayed at the Galt House a few blocks from the start and finish of the Kentucky Derby Mini.  Great planning on our parts!  We woke up and I ate my bagel that I brought from home.  This was the only hotel that I can remember that did not have a mini frig.  Luckily I didn't need to refrigerate the pretoasted bagel.

We walked down to the start.  Megan's parents came to watch us run for the first time!  We had an audience for the Derby!!  We were walking with lots of people trying to find Megan's parents and the bag drop off. 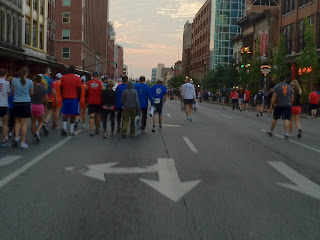 It looked like everyone was being called to their death.  I think the aliens were making us walk towards the ship and we were all going to be goners for sure!
We found Megan's parents pretty easily.  And Bag check was pretty easy too.  Although it was not well ran. Megan said that bag pick up was a nightmare!  One person manning the station and people were just finding their own bags. We said good luck and made our meeting place after the race and we both headed off to our corrals.  I found mine pretty easy.  Now getting to the corral was not as easy.  It was pretty well barricaded..but I found a way in.  There wasn't too much time passing before we were off.  I will say I have never seen so many new runners at a half marathon.  The two ladies behind me were appalled that people were just throwing their clothing on the ground.  The one lady was wondering if people would come back for their clothes.  If I could run and look back at the same time I would have told her that they donate them, but I can run forward and look backwards without dying.
The first few miles were pretty good.  The weather was great.  I was going to wear my throw away jacket but I didn't need it.  The temps were in the mid fifties...a great day for a run.  When I started running the first few songs on my ipod were playing background music again.  Not sure what is going on there.  It happened during a training run so I just figured it was the headphones.  I bought new headphones and still had the same problem.  How was I going to run 13.1 miles listening to background singers?  Ugh..this is not a good start to my run.  Well a few songs in and I had no problems.  I am thinking that Rihanna did not like the fact that I put her right beside Chris Brown.  But no worries I had my singers back after a few songs.
No real issues during the first half of the run.  I did later find out if I kept my pace the entire second half I would have PR'd.  GRR  maybe next time I guess.  I did learn that the guy running near me just purchased 25 acres of land for $25,000.  Not sure where it was located, but he needed to take the girl he was running with there to show her.  I love listening to some other peoples conversations as I run!
I was running in my Athletica running skirt.  I had previously ran 5-6 miles in it.  It is a great running skirt for 5-6 miles!  7 or more miles however, not so good.  This is my first half marathon that I had to stop at the medic.  The skirt started to slowly kill me around mile 8.  The Chafing was horrible!  I had on Body Glide, but by mile 8 I'm not sure how much glide I had left.  My skirt is just cutting into my legs and promoting the wonderful chafing that I was starting to feel.  Around mile 8 I was scanning the crowd for a mom with a big purse..she might have some hand lotion that I could beg for.  No mom with big purse was seen.  I then started scanning the area for marathoners with packs that may contain something to help me out..no luck there.  So I suffered through.  We head through Church HIll Downs.  Very cool to run through Church Hill Downs.  I did miss the horses practicing on the practice track..I did see the ambulance calling my name.  I ran over and asked if they had any Vaseline..none..lotion?..still negative.  Looking sad I started to leave when the ambulance man asked if lubricant would work..yes it will!  Thanks!  I rubbed it all over my thighs and was off!  I was feeling much better.  I pulled over around mile 10 or 11 to another medic tent to lube up again.  I should be fine until the end now!
The run was great!  I felt the best I have at the end.  I walked the least amount that I have walked so far!  So improvement is in the air!
After the race Megan found me at our meeting place.  We got our beer and headed off for some french toast (I guess that is my go to after half marathon food choice).  We found Lynn's Paradise Cafe.  If you are ever in Louisville, you must eat here!  It was a great find! 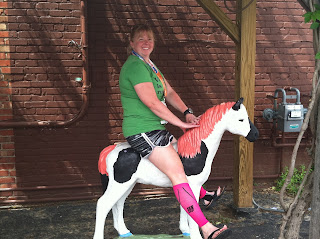 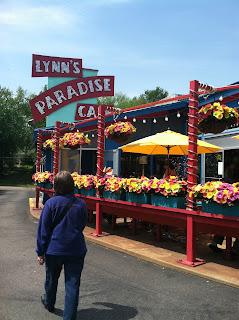 It was great place to eat.  Megan's parents left for Cincinnati after lunch and we headed back to the hotel to shower and decide on what to do for the rest of the night.  We decided to head out and take a walk down Bardstown Rd.  We ended up eating at a place that her cousin recommended and then afterwards we were forced to wait out a really bad storm at Famous Homemade Ice cream and Pie...I was forced to eat some Derby Pie...ah the hardships!
After the rain let up we headed back to the car and back at the hotel.  We were tired..we were going to get up early to head back to VA.  Thanks Kentucky!  Great race and great food!
Posted by Running Librarian at 7:53 PM

I had the same problem with my shorts that have compression shorts underneath. I wore different shorts with compression to a 5k yesterday and they rubbed the same spot raw again! :( Guess I need to carry something with me next time!

Oh no! I figured that I now know that I can only wear that running skirt for less than 5 miles. lol