Today was a beautiful day!  The perfect day to run.  I, however, did not run.  I cleaned some and ran some errands and then decided that Riley would probably enjoy a walk and I would like to check out some new potential places to run.  I hate running along the road..I am looking for somewhere to run that is not super hilly and offers some nice scenery along with the option of not getting hit by a car. 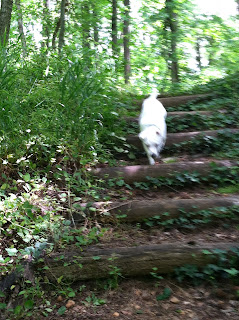 We headed out the door and I was looking for a park in Fredericksburg that is a "great place to run and bike" with paved paths.  I headed to old town Fredericksburg and never found the place.  It looked like it was the middle of downtown according to the address.  I guess they do have paved sidewalks, but not really what I had in mind when I read the write up on line.
So I continued driving and saw a sign for some Battlefields and Ferry Farms (George Washington's boyhood home)  And next to the sign it had Bird Watching trail.  That sounds like it might be a nice place to run.  So Riley and I pulled in to old Georgie's old place. 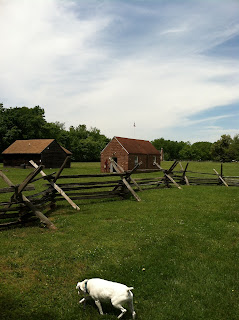 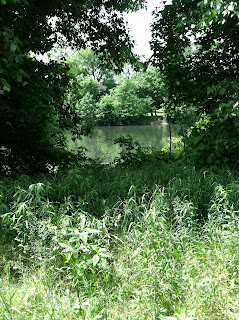 Not a lot of places to hike.  Riley and I tried to find some trails. There was one that was a really hilly loop and probably less than a mile..not exactly what I was hoping for.  So George has a nice place to walk, but not so much for running.  I even took off into some fields, but it was  large loop not adding much distance to a run.
Looks like I may be doing a long run around my neighborhood again tomorrow.  Then maybe I will head back out and try to find those battlefields.  Battlefields are probably pretty well kept up and large I would think.  Why is it so hard to find a great place to run??
Posted by Running Librarian at 9:29 PM

Email ThisBlogThis!Share to TwitterShare to FacebookShare to Pinterest
Labels: where to run?

I loved visiting that place and imagining what life was like for the great American hero!