Alex I'll take how many toenails can I lose for $300..and a PR please

So today I ran the Heritage Half.  It is a pretty local race and my money goes towards the local schools in my school district so really I couldn't pass this race up.  That and it was the race I PR'd last year.  I had a feeling that maybe, just maybe I could repeat a PR this year.  Becky decided she wanted to run the 5K portion so she signed up too.

It was a perfect morning for a run.  I however was hating life when the alarm went off at 5am.  Why is it I say I can't get up early to work out but give me a race to run and I am up before the sun comes up?  So I dragged my butt out of bed and got ready for the race.  I headed out the door to meet Becky at the race at 6:35.  Race start was 7 am.  Well technically 7 for Becky, 7:05 for me.  Yesterday I was a bit perplexed on what to wear for today.  With the temp changes I never know what to wear..I don't want to be too hot when I run.  I settled on my RnR VA beach shirt and some capri's.  I figured I would throw on a garbage bag to keep warm.  I didn't want a repeat of the running jacket that had to be left at behind at mile 2 never to be seen from again.  So I felt smart this year with the garbage bag.  Turns out I was smart.  It kept me warm until the start and I dumped it before mile 1.

It is a rather small race but well stocked with water and gatorade.  I still decided to bring my handheld.  I am now hating my handheld because for some reason I can't close the stupid thing.  This is the second race that I have ended up with wet stuff from the stupid cap spilling.  And during the run some of my water was spilling out while I ran.  I did end up fixing it but I decided that I still hate that water bottle!  I love how it fits and feels in my hand but the spilling really defeats the purpose.  It should keep the water in not throw it all out of the bottle!

I took off with the rest of the runners and really stuck with a group for at least 4 to 5 miles.  Which is not bad considering that there were only 800 runners for the half and 5k combined.  I was loving the 50 degree weather.  I ran pretty consistently, which makes me happy.  The last 5K is where I start to fall apart.  I did look at my watch and thought I may be able to PR.  Since I thought I could PR I kept on running (slowly but still running).  The end of the race is on a track.  That freakin' track is the longest track known to man!  It felt like it was at least a 3 mile track (at least!)  I did hear my name announced as I was running the back half and then Becky came on the speaker to cheer me on!  Yeah!!  I crossed the finish and thought..damn I didn't make my PR!  GRRR 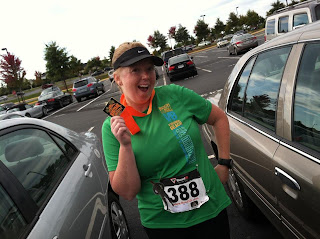 After the race we headed over to meet with Megan and enjoy some brunch.  Megan ran an 8K this morning too.  As we were driving I sent her a sad message how I thought I would PR but I didn't...stupid race.  Boo!!
As we were sitting there enjoying our breakfast I checked to see what my official time was..wait could it be??  I PR'D!!!!!!!  Yippy!!  I knocked off  a little more than a minute off of my old time.  I will take it!  So excited!!
Now on to my toenail.  I may be down 1 or 2 toenails.  I find it odd that only my left toenails hate running.  My second toenail is in the process of falling off..I think this run might have been the final dance for the piggy's nail.  The third toenail..who knows..I have lost that one so many times this year that I have stopped counting. I thought increasing my shoe by half a size would help..but who knows...who needs toenails anyways!?

Posted by Running Librarian at 6:02 PM

Congratulations on PR'ing!! Thats fabulous! I almost did that half marathon too but I made plans to go out of town instead.

Did you know Reston is getting a half/full marathon next March? Exciting!!

You should totally go up a half size in shoes. It makes the world of a difference, seriously!

congrats on your pr!!

Congrats on the PR!!!
(and toenails are optional. but if it's only 1 foot, maybe your feet are 2 slightly different sizes? might be worth trying a half-size larger shoe on that foot.)

I am having the.exact.toenail issue right now after a race!!

CONGRATS on the PR!

I can't remember the last time I had all my toenails on my left foot, so you're not alone. Congrats on the PR!

Congrats on your PR!!