So today was the Army Ten Miler, my favorite ten mile race.  Now that may not really be fair since the only other ten miler that I have ran has been the Cherry Blossom Ten miler (which I do not care for).  I have been sick for almost two weeks with a head cold/ chest cold.  I have been feeling much better these last few days but nowhere near what I should feel like.  Before I continue please be warned there will be some excuses and maybe a bit of whining.

But before I get to the excuses...

We picked up our friend Glen who was running with a random stranger's bib (Peter). 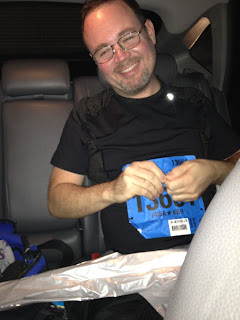 For the rest of the day we referred to Glen as Peter or Pete as I liked to call him.  We also enjoyed making up Peter's back story.  This was going to be Glen's first ten miler.  Megan and I hooked him up with some gu and a garbage bag to start the race with or as we referred to it, racing chic. 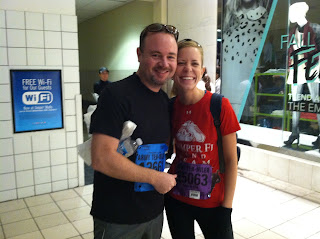 We arrived and headed to the mall to use some bathrooms with running water.  Because that is how we roll.  After we enjoying the running water we headed to bag check at the Pentagon.  Megan is not a fan of the Army Ten Miler, so she was hoping that it was going to be a different experience than last year, which she didn't enjoy.  Well it was different..not always in a good way for her.  As Megan was grabbing a bag to put her backpack in we ran into Gary, Kevin and Adrienne. 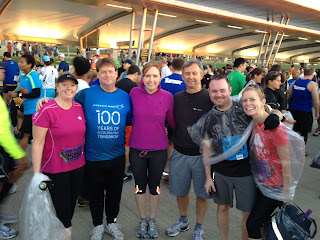 Always great to run into friends.  And once again, Gary finds us in 30,000 people with no problem.  We are convinced he has a tracking device on either Megan or myself. :) 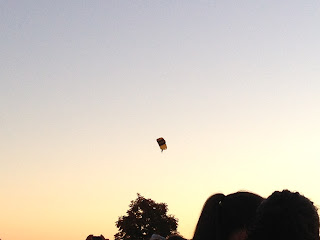 Before the race starts some Army guys parachute down.

We checked our bag and headed to the portapotties.  What a mess.  Last year our corrals lined up on the street.  This year they had the corrals in the middle of the parking lot right up against the portapotties.  Ugh.  Talk about not having room to form a line.  I found an endish portapotty and talked the people around me to make a new line.  People were in a super long line and sending people down the line to get in the portapotty.  That's not how it works.  So the people to our left had 3 portapotties and I stood poised to take the one in front of me when the person came out.  Turns out that was a great plan that the guys beside us used too.  In no time we were in our purple gate waiting for our long walk to the start line.

Glen decided he was going to run with me.  I didn't know how long I would be able to run since I still wasn't feeling the greatest and I didn't know how the whole breathing thing and running thing would work out.  Turned out it didn't last long.   I sent Glen (I mean Peter) on his way before mile two.  I was quickly realizing it was going to be a sucktastic run.  I started walking around mile 3 and was hating life.  I did really enjoy the mile three water stop Army guys.  Ah the bright spot in my lack of a real run.  I ended up walking a large portion of the run since I just felt tired and sucking wind when I tried running.  I guess when you don't eat right the days before a run, you don't have a lot of energy to run.  That and I haven't moved off of the couch for 2 weeks (well other than going to work) (I warned you that the excuses would be flying).
I wanted this run to be better than last year.  I really felt like I could PR on this run.  Well sometimes what we plan on, just doesn't happen.  It wasn't my day to conquer this race.  Next year I will return to PR!!  I like the race, just not when i am sick. 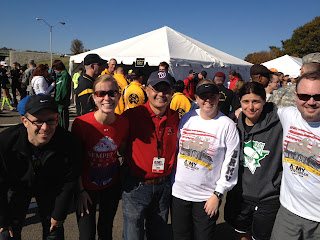 We ran into Bill and Jeff and Marie!  Always good to see friends. 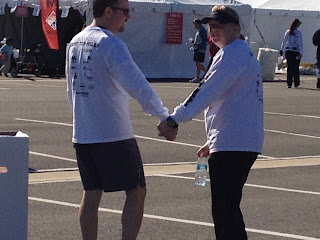 Skipping through the lot with Peter. 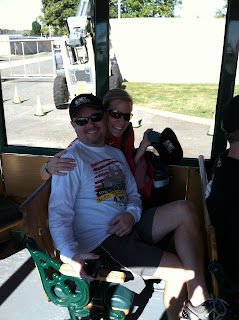 Always fun riding the trolley back to the south lot. 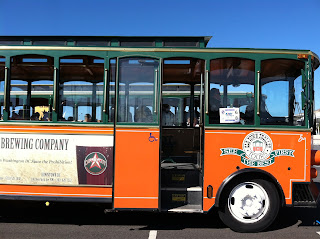 Afterwards we headed for some french toast.  Yumm!!! 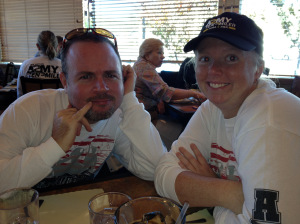 Army Ten Miler, it wasn't real fun this year, but next year watch out!

Posted by Running Librarian at 8:40 PM