Reston 10 miler and That Damn Juggler! 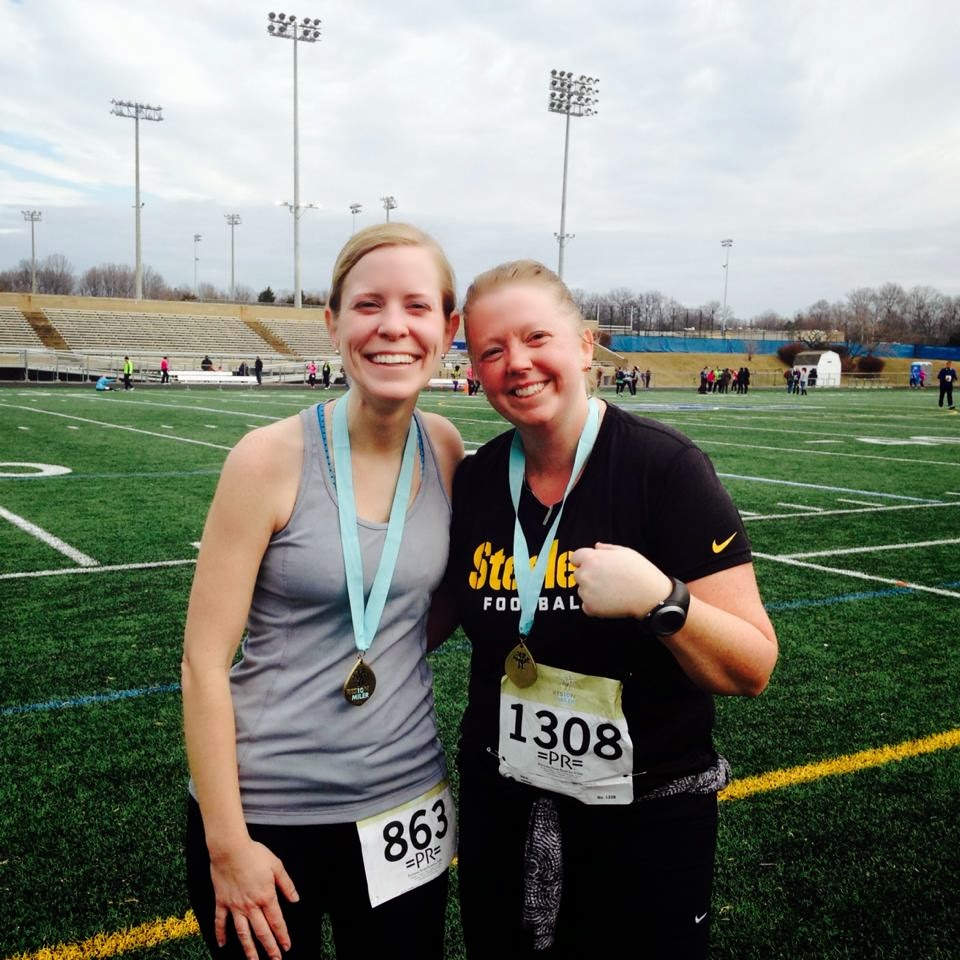 Yesterday I ran the Reston 10 miler with Megan and Sandy.  It was a run that I really thought that was not going to happen.  Or maybe it was a run that was just one big mess.  I got my stuff ready the night before.  I took a shower so I could sleep in a bit and not have to worry about much.  Well I guess I didn't worry about much.  As I was driving to Megan's I realized I forgot my music.  Oh well that is not that big of a deal.  When I got to Megan's and was about to hop in her car I suddenly realized what else I forgot...my bib!  In all of my races that I have ran I have never forgotten my bib- ever.   Well I can't say that anymore.

We were off and we missed the exit for the race and then almost turned onto the wrong exit at the next one..yeah it wasn't looking like this was going to be a great race for me.  We got to the race and there was no parking at the high school so I jumped out of the car to find a bib while Megan went off to find parking.  Ugh..was this really how the day was going to go?  I headed into the high school thinking that the packet pick up would be there.  Nope.  I did find super long bathroom lines though.  Great!  Doesn't look like I will be able to use the bathroom before the race either.  I made my way down to the track to see about a bib.  Luckily the high school student was able to hook me up with a new bib after I filled out some paperwork.  Yes! 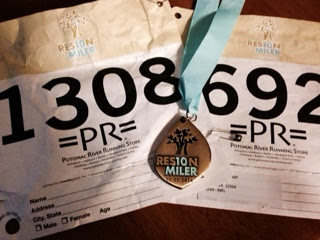 Both of my bibs!
I then started running towards the start.  No time for the portapotty.  So I am running thinking I hate running before a race.  I don't want to be running to the race and then run a race!  But no way around it.  I ran into Sandy and she was nice enough to put my sunglasses in her car.  I normally would just run with my hand held water bottle, but I also took my phone so that I could find Megan.  So my hands were going to be  full as I ran.  I look down at my Garmin and shocker! It is frozen!  Yep that is the way my day is going.  Oh well.  Lets see how this race goes.  Not sure it could go much worse.   We found Megan and we were standing chatting when I saw HIM.  That damn juggler was at the race too! 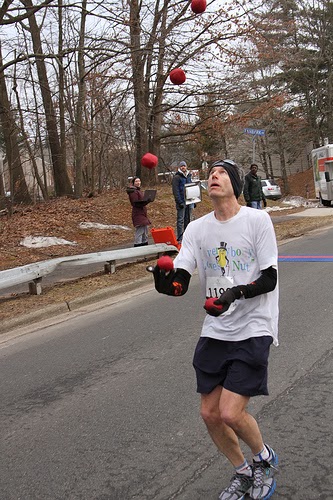 Well of course the Damn Juggler would be here!  Why wouldn't he?

Before the race Megan mentioned that there are probably no portapotties on course.  She ran the course a few months ago with the same group that was running this race.  Great!  I need to use the bathroom, the lines are long and there are no portapotties!  She did mention that there was a lovely 7-eleven around mile 3.  I filed that information under good to know and then we were off.

The race was pretty hilly.  I haven't really been running much more than 4 miles so I didn't really know how today was going to go.  Based solely off of everything that happened prior to the race I would not be shocked if I was hating life during this race.  As we were running I had a great conversation about hatred for a certain Hot Chocolate Race.  It is amazing that the race was over two years ago, but when you see someone wearing that damn jacket a bunch of strangers start complaining about how horrible that freaking race was.  After chatting about how we all hated the Hot Chocolate Race I went off looking for somewhere to use the bathroom.  There were trees but not very thick.  Not stopping there.  I saw some sort of nature place, I checked to see if there was a bathroom..nope.  Soon I came up to the 7-eleven.  I saw a women head off course and I was right behind her.  The 7-eleven worker was super nice.  She unlocked the bathroom for both of us.  Bless you!  There was no way I as going to be able to run another 7 miles when I was dancing while waiting for the person in front of me. 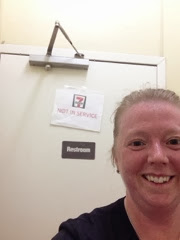 The bathroom was not really out of order.
While in the 7-eleven bathroom it was the perfect time to take off my long sleeve shirt under my short sleeved shirt.  It started in the upper thirties and later in the day it was supposed to hit the 60's!  Then Monday we are getting winter storm Titan and temps will be in the 20's.  Talk about crazy weather...anyway back to the race.  I was sweating like crazy so perfect time to take off the long sleeve.  Ah..so much better.  Now I didn't have to keep thinking about bathrooms and how hot I was.  It took maybe five minutes to head off course and boy was it worth it!

As I said it was pretty hilly.  I did pretty good at running up the hills considering how much I hate hills.  I did walk some up the hills but I usually would run at least some.  I was feeling pretty good with my running. 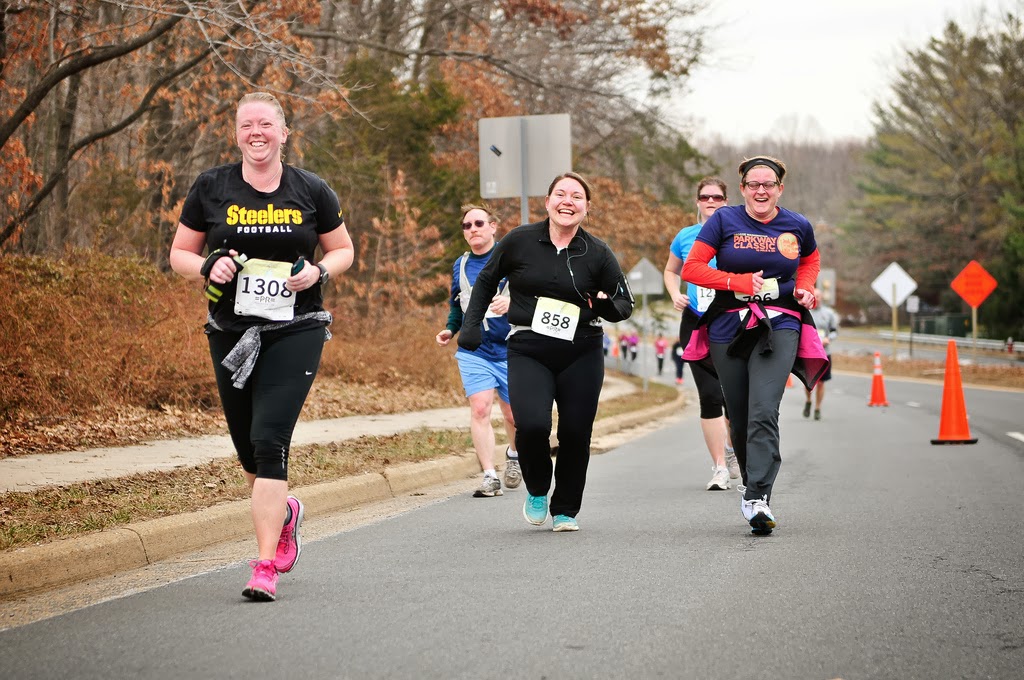 Mile 6 was a great mile!  I wish my Garmin was working because I would love to know my pace.  It was one of those miles that you just felt like you were flying!  Now the next mile not so much, but that is ok, every mile can not feel like you have sprouted wings!

I headed into the last mile thinking that I was feeling pretty good considering that I didn't really train.  I am so glad I ran this race because in a few weeks I have my first half marathon of 2014.  I headed towards the finish on the track.  I was thinking that we were going run the track, but no the finish was not that far from the track entrance.  I did a pretty good job of sprinting the last few.  Looking at my time if I didn't stop for the bathroom I would have PR'd!  What?!  But it was so hilly!  Yeah I woulds say it turned into a pretty good race!

I found Megan laying on the track stretching or sleeping..I am not sure which.  We also found Sandy.  We got some pictures and then headed out for some breakfast. 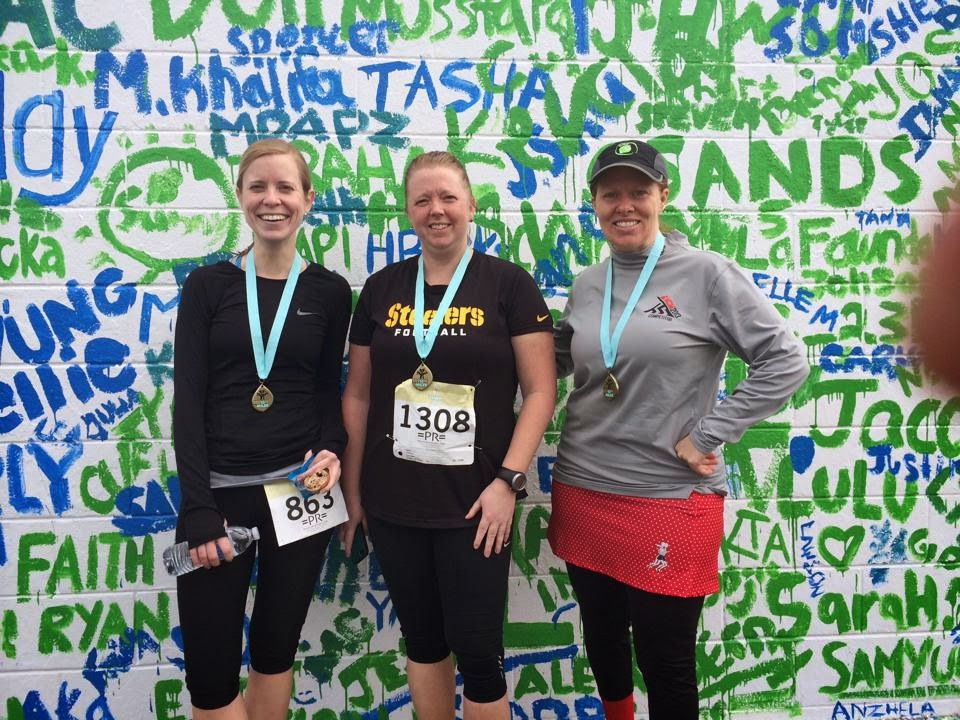 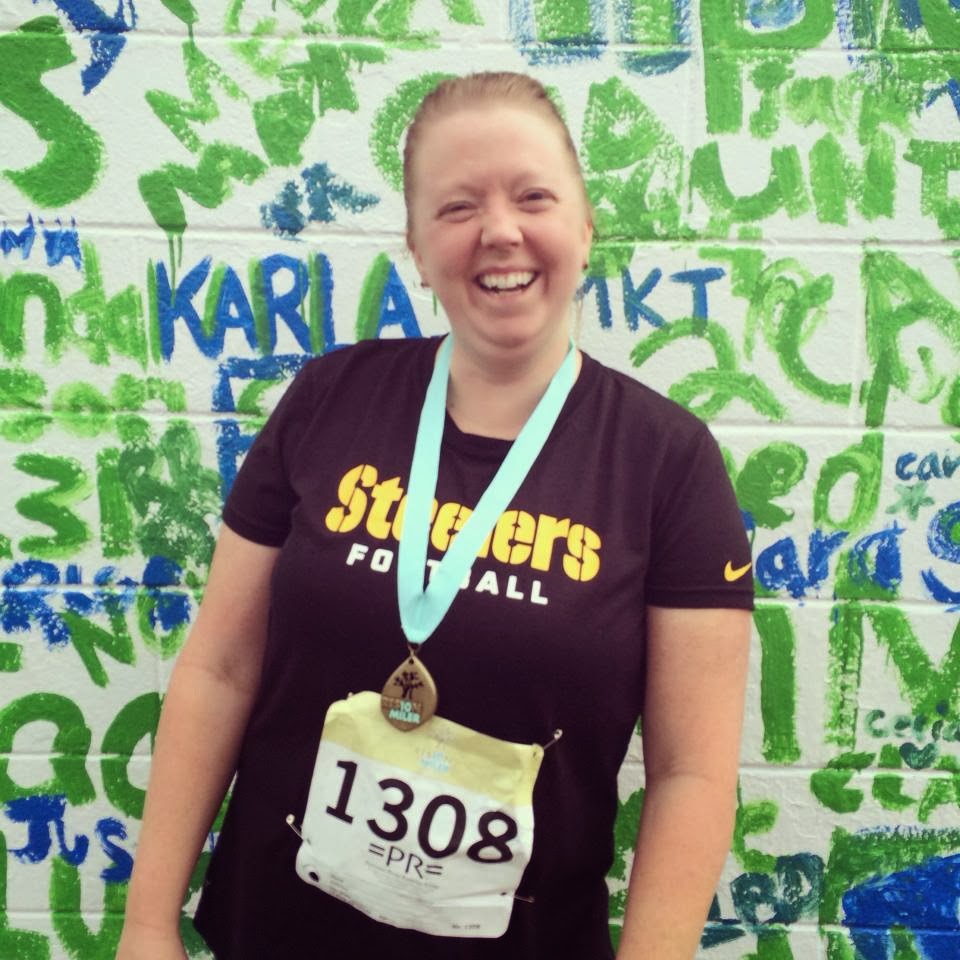 Congrats on a great job. I totally should have signed up for that race - I would have enjoyed that a lot more than the run I did by myself.

What half are you running?

Oh, Lordy! What a series of unfortunate events! At least it worked out okay. Maybe that juggler is stalking you. You should trip him and demand to know why he won't leave you alone!

Wow - I'm impressed that after all of the rough glitches of the morning you were so close to a PR!! Next time for sure.
I was telling my son about the running juggler - he thinks that is awesome!!

Great job Pam! I'm glad it turned out to be good, even though it didn't start out that way! I honestly don't know what I would do if I didn't have my music. I don't wanna find out either!

Loving that smile at the end, sign of a job well-done. Congratulations! :)

I hate that juggler! LOL He's probably perfectly nice, but when I saw him at the Cherry Blossom 10 miler last year I was working so hard to keep going, and he just seemed like it was so darn easy. LOL