Kristen and I woke up to a perfect morning to run.  The temps were in the low 50's and very little wind.  I was stressing the night before about what to wear.  I brought some different options in race day clothes but I was worried it was going to be really cold and I didn't bring anything warm enough.  I was still debating to wear my light long sleeve champion shirt under my pink t-shirt or not.  All I could think of was how cold I was the previous day so I put the long sleeve shirt under my tee.  If worst came to worst I could take it off and leave it behind mid run.  We were off to drop the car off at Walmart and take the bus to the start line at 6:50.  We saw some great people in the parking lot dressed up in their pirate wear.  Oh how I would love to do that some day.  I just keep thinking how uncomfortable I would be dressed up. 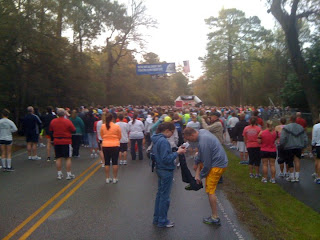 The start line was not looking too bad when we go their.  I now realize how small the race is.  2500 people.  I love small races!  Before long we are off.  I barely make it to mile two before the long sleeved shirt comes off.  I decide to just tie it around the waist.  This is twice in two weeks that the long sleeve shirt has saved me so I just can't get rid of it. I am also carrying my new hand held water bottle.  Oh how I love that water bottle.  The water stops were every 3 miles.  And I like to drink pretty often since I am such a huge sweater.
We head through the neighborhood and people are out.  I wouldn't say they were all cheering us on. Most were just staring.  Kinda like look at the strange people running...why are they all running??  But hey didn't bother me.  I was just glad they were there.  I was running around some really nice people too.  I have never heard so many people say thank you to the people cheering us on, the bike guy checking up on us throughout the run, the water people, the police officers..etc.  Which was great.  I try to smile at the people, but I am not sure it comes off as a smile.  It might come off as "I'm in pain".  I just don't talk a lot when I run so I was a bit lacking on telling everyone thanks.  And the funny thing about that is Kristen said the same thing when we were comparing our run.
Mile six we saw a nice hill into another neighborhood.  Oh how I hate hills! 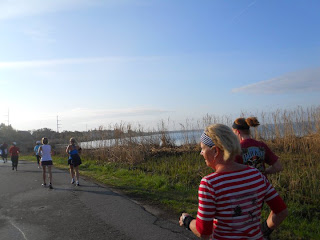 We were running through some neighborhoods on the sound side of OBX.  So pretty.  The bike guys were really great.  They were constantly riding up and down the race and checking on runners and asking if we were ok.  They were also complaining how they were cold b/c they didn't wear the heavier bike wear.  I on the other hand was sweating and feeling like the temps were perfect.

It was at this time I was trying to distract myself from wanting to walk by counting my steps.  It worked for a bit.  But then I was irritated b/c I was losing count of my steps b/c my stride was off from my count. Well I guess I can walk some.  I was trying not to push myself too much because when I did that last week at Cherry Blossom I thought I was going to throw up at the end and I felt all shaky and horrible.  So I didn't want that to me again so I was backing off a bit and just enjoying the run. 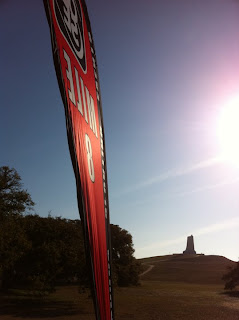 Mile 8 put us around the Wright Museum was a bit windy and long.  5.1 miles to go!

Now we are starting to head towards the dreaded woods.  Where the possibility of typhoid, malaria and ticks are very real.  As I am running through the woods I notice how hilly it is.  I really don't like running in the woods or on trails.  I like the road under my feet.  As I am running through the woods on the gravel/sand/dirt/ mud path I am reminded that I like to run on pavement.  Sometimes I find my foot hitting the gravel wrong.  Please God don't let me twist an ankle today.  The water stop at mile 12 was being served by pirates and wenches.  How great is that!  at the end of the road we turn to go into the woods on a lovely mulch path and this is what we see... 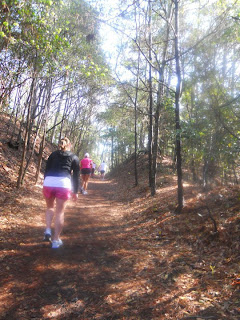 It is the hill from hell!  I turn to the volunteers and ask them if they are trying to kill us?  They just laugh.  Yep they are trying to kill us.  The last half mile or so is straight up and straight down and straight up and straight down.  Ugh
I end up finishing the half in 3:01...3 mins faster than my Philly run when I was sick. It was also a lot more hilly than the Philly run.  My last half of the course I was more than 2 mins slower per mile than the first half of the course.  I think that is because of the hills, especially those last 3 miles. Considering how little training I did for this race I will take that PR.  Even though I didn't properly training I made it.  My legs were a bit sore but that is ok.

Two days back and my friend Megan asks if I would do the Alexandria 1/2 marathon on Memorial Day weekend.  After thinking about it I decide why not.  I have 6 weeks to train more than the OBX run.  Maybe I will PR on this race too :)  Fingers crossed.  It is supposed to be a really flat run, so that should pretty much ensure a PR.

Remember if you haven't checked out my giveaway you have until Sunday.
Posted by Running Librarian at 9:19 PM

yay! great job! i can not believe you had to run up that hill! that's crazy!

That hill looks ridiculous!! Doesn't it always amaze you the strange things people dress up in? It's hard enough to run, but top it off with some odd costume and I'd hate it!

Wow! That hill is crazy!!! Good for you!

Just found your blog. Great job on pushing yourself farther.

I'm curious about the hand held water bottle. What size did you get, what did you like most about it?
I've been running with a water belt but I'm considering hand held bottle for races.

It probably holds about 12 oz (I'm guessing) not too big. I don't really feel it while I am running. It has a nice little pouch to carry some gu or whatever you want to carry. Nice and comfy running :)