I know I said I wanted to run 600 miles by the end of the year..but I would also like to add that I would like to be a more consistent runner.  This month I can honestly say that I have done a reasonably good job of being consistent.  I have done a long run each weekend..sometime not the miles that I originally wanted..but a long run none the less.  I take that as a huge improvement.  If you read my race recaps one thing is pretty constant..lack of training or sometimes no real training...yeah I'm cool like that.  This time I have actually been running during the weekend.  I have gotten some runs in during the week too! 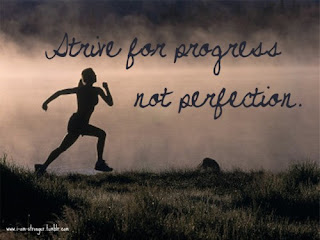 I started off wanting to run 600 miles this year..I may make it, who knows we are only two months into the year.  I have ran more in January than I have ran last January.  So that is a positive!  I have already pasted last year's running miles for February and we have one more week left.  Which is really good for me.  I'm shooting for double digit run next week. :)  We will see..I just saw the news and it said cold for the weekend and that doesn't sound fun! Hopefully the weather will want me to run too and it will be in the 40's or 50's.

I also am kicking around the idea of doing a half marathon before Rock N' Roll USA.  There is a small race in Chambersburg PA.  It is a 2 hour drive.  I could get up really early and make it to packet pick up with little problem.   It looks like it is a small race and I used to live near there for a bit. So it could be a fun run.  It is on March 10th and it would give me 8 half's in a year.  I then can move up in Half Fanatics.  I have to see what the temps are going to be.  I don't want to run in snow.  I know some of you love snow running, but I do not like running in snow or ice.  Another plus is it is also pretty cheap for a last minute race.  Fifty bucks is not bad for signing up for a last minute half.  It is looking like a real possibility.  So stay tuned to see if I actually run it :)

How was your running this weekend?
Posted by Running Librarian at 6:55 PM

Email ThisBlogThis!Share to TwitterShare to FacebookShare to Pinterest
Labels: goals

You should do the Frederick MD half marathon. Also are you interested in doing the Rock N Roll Half in Philly.

Rock n Roll Philly was my first half marathon..I was super sick (I think I picked up something from the hotel) and so it was a miserable experience..don't think I could bring myself to head back to Philly...sorry Philly. :)

I think runnign 8 halfs in a year is pretty amazing and consistent !!
Good luck if you do your half on march 10.

Love the idea of the half!

Great start to your yearly mileage goal so far :)
One of my goals is to be CONSISTENT too. I can go on streaks of 2/3 weeks at a time of NO running at all sometimes!

Once I became a consistent runner I swear everything about running changed for me...it just became something that I enjoyed so much more. Maybe because I"m a person who likes habits :)