Well in my quest to become a Half Fanatic, I may need one race to run in April, May or beginning of June.  So far Megan and I are signed up for the DC Rock n' Roll Half on March 17th and the Kentucky Derby Mini on April 28th.   We have until Mid June to run another half to qualify as a Half Maniac. 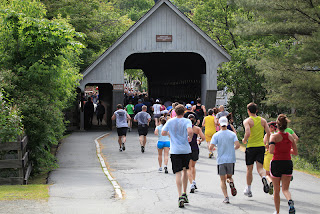 So far we are thinking of signing up for the Covered Bridges Half Marathon in Vermont.  I  have never been to New England so this should be fun.  The race takes you through 4 covered bridges.  It looks like it is a very pretty run.  The run is limited to 2300 people.  So it is not a large race, but large enough.  The only issue is that this race has sold out in 19 minutes last year.  So if we snooze we lose.

Anyone have any half marathon ideas in case this one doesn't work out?
Posted by Running Librarian at 7:37 AM

Email ThisBlogThis!Share to TwitterShare to FacebookShare to Pinterest
Labels: half marathon

flying pig in cincy is the week after derby. be warned though it is ridiculously hilly :(

I lived in Vermont for 4 1/2 years and while I've never run that race, it is the talk of the state.. literally! anyone and everyone has heard of the Covered Bridged Half because it is a gorgeous, quintessential New England race. Good luck getting a spot- it's well worth it!
I've also run the Unplugged Half in Burlington, Vermont last April (by the RunVermont org) and it's a very flat and fast course.. not many spectators, but scenic along Lake Champlain and views of the Adirondacks.. it sold out quickly as well, lots of runners in VT! I might try to do it again next April!