This weekend I have done a bunch of nothing.  I should feel bad about laying on the couch as much as I have..but I don't.  I'm thinking of it as recharging my batteries. I did run on Saturday, Sunday and Monday!  Go me!  Did I run my long run this week, no, but I did run something which is better than nothing.

Yesterday I thought I was going to run the loop.  The plan was to run 6.  It was a beautiful day, the sun was shining.  It was in the fifties.  I did a few loops and then stopped to pick up Riley and head to the tennis courts to lock us in and run some more.  The tennis court is almost as boring as running the mile loop, but at least Riley gets to run after me if he wants and just sniff around if he wants.  I did get to Spanish music.  Well the music wasn't on probably since he was finishing up by the time I ran by.  Ah it really did feel like springtime!  Don't worry truck washing guy, I will see you again I am sure!  I didn't get in my 6, I stopped at 3.  This training isn't looking the best so far.  But at least I am getting out there right?  And it is pretty early in the training schedule. 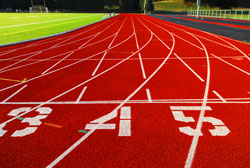 Today I headed to the track and did some 200 m sprints..ugh..I am sure my legs are going to feel it tomorrow.  It was a bit cold, but not bad once you got out there and moved (isn't that always the case).   I threw in some jumping jacks, crunches, bicycles and push ups in between some of the sprints.  I figured since no boot camp, might as well do some boot camp moves.

I have some new running shoes coming.  There is just something about new running shoes.  I'm trying a new shoe so I hope that they work..if not I will be sad and have to send them back.  I'm sticking with the Brooks brand though so hopefully the new shoes will be love.  On random non running shoe notes, I headed to Macy's yesterday and found some flats for work for 12.50!  How great is that!  I love when I get to the register and the shoe is less than I expected!

I have been battling a few illnesses these past couple of weeks which has given me more downtime than normal. I was lucky and got in 3 miles on Saturday only to be sidelined Sunday through who knows when. I understand its the beginning of the season but I need some training and with the temps dropping into the 20's this week it isn't looking good. I have a half marathon in March and my biggest fear is I wont be ready!

hey, my theory is that if running is included u are ENTITLED to some laziness. :)

Nice blog Pam - sounds like you love your running. Good luck with your training for the next half

Any running is good running! I miss running sprints on the track - a sick addiction :)