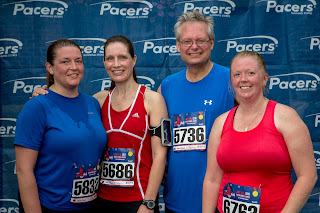 Happy Fourth of July everybody!  I decided last minute to run a 5K with some people from run club.  Yesterday Jen emailed me to see if I wanted to run the Freedom Run 5K.  I said sure.  During the Fourth there are so many 5K's around here that sometimes it gets a big confusing.  Turns out I ran this race last year.  As I was driving to the race I thought..hmm this area looks pretty familiar..I think I ran here before.  Yep I have..same race only different year.

When I got there I saw Jen and picked up  my bib.  As we were walking back to our cars to put our phones and stuff away we saw Susan from run club too.  So we all chatted and waited for the 5K to start.  Last year it was horrible because of the heat.  This year it was not nearly as hot.  Now don't get me wrong, it was still hot and humid, just not hot like the flames of hell are going to swallow you up at any moment hot..so I was happy.  It felt like it was going to rain too.  We have had rain everyday for the past two weeks.  Not the best summer.  I really wouldn't have minded the rain, it could have cooled me off.

As we took off, not even a mile down the road, and some mom was reprimanding her son for starting to walk so soon after starting.  I was a little irritated.   The kid was maybe 7 and I just feel like it should be fun to run.  She then said fine if we have to walk we need to get over to the right..so run until we are on the right..I know it can be frustrating to run with kids that have no concept of pacing..but really they are kids.  I'm sure that she knows what her son is capable of producing, but I just felt like she should just let her son run his kind of race, not the mom's race.  I also saw some crazy stroller mom dart over and almost take off this girls ankles..strollers scare me in races.  And she had the good old double jogger too..not sure she realized how close she was to knocking over a runner.  She did sort of stopped and straighten up the stroller before continuing with the race. 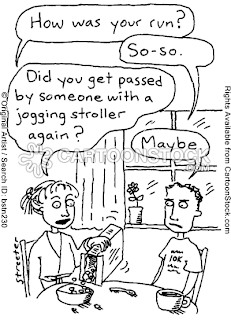 I thought I did pretty good for the first two miles..then the hilly part started and I just hated life.  I did better than I did last year in the heat.  The last hill defeated me and I ended up walking a bit.  I finished and found some run club friends.  We got our picture taken and watched some kids playing in the fountain.  I would have loved some Ben & Jerry's but the line was crazy.  Last year we had Popsicles this year Ben and Jerry's.      We also got this lovely beach towel as our swag. 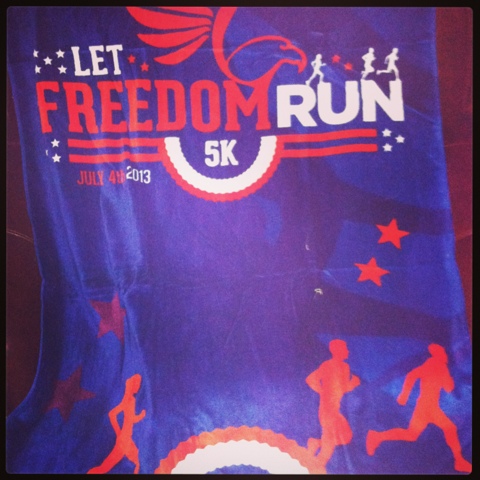 After the race we headed to The Silver Diner for some French toast.  What a great way to start off the Fourth of July!
Posted by Running Librarian at 3:03 PM

Glad the weather wasnt too hot this year. Crazy people with strollers scare me too...and that poor little kid! Yum...French toast after the race sounds fabulous! Love that shirt, too! Great job!