I got up and out the door by 6:40, a bit later than what I had hoped for, but I survived.  I headed out to the spot down the road.  It's very quiet and shady, perfect for a long run day.  There was even a bit of breeze out there this morning. 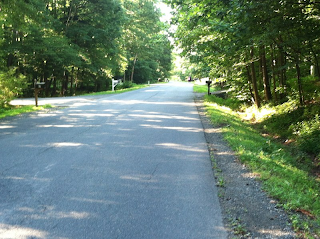 The people that I saw out and about this morning were very friendly and would say hi as I passed them.  I might be making some new friends this summer.  Maybe I will be invited for some block parties..even though I am not part of the block.   I think this spot is going to be great for my long runs.

I ran for 1 1/2 hours this morning using my new camel back.  It worked out great!  It wasn't too heavy and there is no way I can train for a marathon using my handheld.  I also enjoyed all of the storage.  I was able to carry my phone in a front pocket.  My shotblocks were in a back pocket and my car keys were securely fastened to a clip on the inside compartment.  This could be my best running purchase in some time.

I ran in the neighborhood and was scared twice.  First was a rather scary statue of a white Scottie dog.  Yeah terrifying!  It was hidden beneath a mailbox.  I think I saw it snarl at me...Not sure how the mailman delivers mail with that fake dog sitting there.  Luckily nobody was around to see me jump when looking down and seeing the statue.

The next scare was as I was completing a circle in the neighborhood and a man came up behind me and I may or may not have screamed slightly.  I don't know what was making me so jumpy.  He laughed at me as he ran by me..did some push ups and then ran back towards me.  I didn't stick around to scream again on his return run.

At this point I was about 4 miles into my run and sweating like mad.  I was starting to worry that I would end up drowning in sweat and nobody would be around to call 911.  I headed out of the neighborhood and down a road to a new neighborhood.  I had no idea where I was running, but figured it could be fun exploring.  I ended up in another neighborhood with a bunch of new housing being built.  The people in this development were very nice too.  One person was nice enough to have their sprinklers out watering their lawn, and it might have also watered down a sweaty runner.  I also might have made sure that I headed back  near the sprinklers for my return run.  Cool water never felt so good. 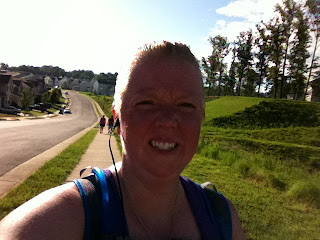 At this point I was not loving life.  I was hot and sweaty and wishing my run was over. 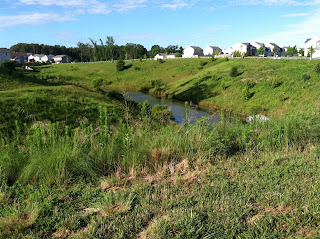 Ah  never knew this existed in my town.  Hopefully this route will amuse me for awhile as I increase my mileage.  The nice thing is that it was pretty shady for most of the 1 1/2 hour run.  I also didn't have too many cars to deal with.  If I would have gotten up and out the door by 5:30 am I would have even less cars to worry about.  I am happy that I got out there and knocked out some miles.  Although I am wondering how in the world am I going to knock out a twenty mile run..that is going to eat up my entire morning!  I guess it will have to be one mile at a time. :)

When you run your long runs..do you run the same route or do you try and change it up?

Posted by Running Librarian at 10:33 AM

Great run! We do our long runs with a running group and they establish the route of the week. We find out the route when we arrive and it is always different every week. Those of us training for a long race, let the people in charge of the group know ahead of time of our distance needs and they plan accordingly. Works out great!

Great job on the run!! I've jumped a few times while out running and then realized that I was just being a nut!
I used to always run the same routes but now that I have a Garmin (finally - late to the party) I'm enjoying mixing things up!

I think I was just thinking about other things and not really paying attention. Or I have a fear of dog statues

That is great that you have your long run mapped out for you and you have friends to run with. It always makes the miles go by a bit faster

Nice job on the run..I always use a camelbak on my long runs also. I just wish I could run in the mornings..my body just says..NO!! Even if I can get out of bed and actual start running my body has not so subtle ways of telling me I am not a morning runner.