Well I got up and took Riley on his 1 1/2 mile walk this morning and then had enough time for a mile run.  I figure a mile is better than nothing.  So I dropped Riley off at home and headed back around the loop.  I think Riley is liking the new routine of long walks.  I always worry about the long walks in the summer..I don't want to give him heat stroke, but he seems to be fine with it so far.  It helps that it has not been as hot as in past summers.  Last year I think we had 100 degree weather for most of July..this year only upper 90's.  Ah I can feel the cool in the air!

After summer school I came home and took a nap.  Those kids wear me out.  This evening I decided to try a new place for a walk...Government Island. 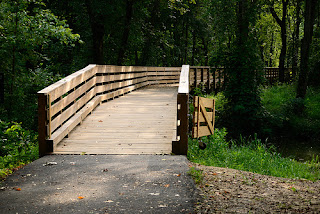 I have lived here for ten years and I have never heard of this place.  A neighbor told me about it.  She walks her dog there all of the time.  I guess that George Washington had some of the stone from the quarry here in Stafford sent up to make parts of the white house and the capital. Government Island is an historic 18th and 19th century quarry site that provided Aquia sandstone for the construction of the White House and the U.S. Capitol building in Washington, D.C. Government Island was purchased by Pierre L'Enfant on behalf of the federal government in 1791 to provide stone to build the nation's new capital city - Washington, D.C. The Island was first known as "Public Quarry", as it was owned by the federal government to build public buildings.
Who knew?!  Well we decided to walk it.  It has a nice paved path and a long wooden boardwalk over the marsh and then some wooded paths.  It was a nice shaded walk.  Riley loved it! 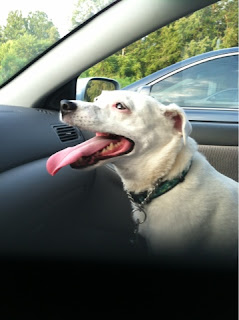 I came home drank some water and headed back out the door for what I was hoping would be a five mile run.  It was hot and soupy outside.  I thought I was doing pretty well considering that my weather.com app said the feels like temp was 100.  I think it probably was wrong because it said that the actual temp was 89 feels like 104...although maybe it was right who knows.  I waited until 8:20 to run. I was running the loop and getting bit by some skeeters.  If you know me, you know I don't normally get bit.  I guess they liked my sweaty self.

I couldn't take it anymore so I stopped at 3 miles.  I really do need to start running more in the morning.  Less soupy air and less skeeters. 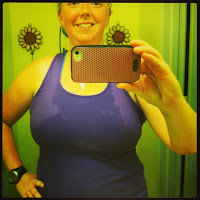 Posted by Running Librarian at 10:01 PM

Way to get out there! This weather truly is awful!

Morning runs are my saving grace! I would be miserable if I chose to wait until the end of the day!