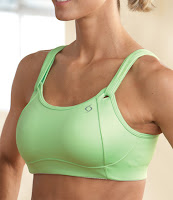 So I ordered a new sports bra from Title Nine.  The 3 reason sports bra.  I guess it is called 3 reasons because you need to come up with three reasons why it takes so long to get to your door.  I ordered the bra on July 7th and I have still not received it.  I was supposed to receive it in 7-10 business days.  Business days do not include the weekend.  I guess the branch of the USPS do not like to work on the weekend like the rest of the postal workers.  The more that I think of it, I think they might have sent it Pony Express. I wonder if the horse and rider had problems crossing the Rockies or did he decide to go through the desert?

I have had a computer customized and it took less time than this one bra.  Maybe this bra has super powers!  I guess I would be ok with it taking so long if it had some sort of powers.  Right now I am hoping it has the power to keep me bounce free.  Hopefully the bra will get here sometime on Monday (because we don't want to deliver on a Saturday).  Anyone else feel like it has taken forever for a package to arrive?
Posted by Running Librarian at 8:19 AM

Oh, no! That's terrible customer service. I do have that bra in the picture and it will be totally worth the wait, though...... I hardly feel it, it's so comfortable and I don't bounce that much! Hopefully it will arrive soon!

Susan I hope it is worth it...

LOL! I am so glad I live 7 minutes from a Title Nine store. I was able to try a bunch on and walk out with my choice. Hope you get yours soon :) Maybe they are walking it to you?

fingers crossed that I get it today and I like it...