Last Saturday I ran the Clarendon Day 10K.  This was my first time running this race.  It was basically the Four Courts Four Mile race from March just starting a bit farther and the turn around was a bit farther down the road.  They said that this was a downhill race.  It was down hill at the beginning but then it went up a bit and the end was up a hill.  So I'm calling liar liar pants on fire with this one :)

Megan and I headed up early for the race..well early for me, Megan was running both the 5K then coming back to run the 10K an hour later.  We decided that if we couldn't find parking around Clarendon I could head down the road and park at a metro and metro in since I was not running until 9.  Turns out that we found a parking garage really close to the start.

We headed over to the portapotties. Then we got a text from Jen that she was already there and she found Gary.


So we found Jen and Gary along with some other random runclub people.  Its great that most of the local races in DC we always usually run into someone we know or recognize from run club.

Megan and Sanjay took off and we waited for some other people while everyone else ran the 5K.  Jen's friend found her. 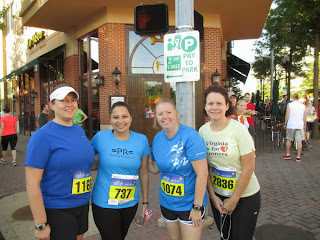 The 10K race was starting and we still did not see Megan.  I was a bit worried that she didn't make it back.  Once you finish the 5K (its point to sort of point) then you have to walk/run up the hill back to the start of the 10K race.  I figured maybe she was up ahead in the crowd..no big deal.  Well the gun went off and we took off.  I was running sub 10 min. miles..which if you know anything about my running style that below a 10 min. mile is not really what I do.  I know it was down hill, but still I knew I couldn't hold on to that for 6 miles.  Turns out I was right..ugh..I kept plugging along a bit slower but pretty happy with my run.  Near the turnaround I was looking to see if I could see Megan and I was really starting to worry..no Megan..wait is that crazy blonde yelling my name?  Why yes she is..I found Megan..or she found me.  All is good.  I made the turn around and started to wish the race was over.  It doesn't matter the distance I always struggle with the last two miles.  Ah mentally I hate the end of races!!  Well around mile 5 or so I had a girl behind me ask if I was with Shirlington running Club..why yes I run with them.  Turns out she has been running behind me for the last few weeks.  We introduced each other and then head off.  I saw her this week at runclub.  Great to meet new people as you run. :)  That last mile sucked.  I didn't want to run back up the hill.  I knew that we were going to have to but I still didn't want to do it.  I hate hills!  Finished and as I crossed I see Gary who points me in Megan's direction.

We headed back to Clarendon and headed to a bar to meet some other friends. 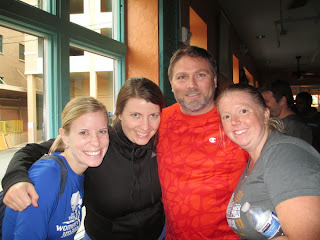 Next up is Heritage Half Marathon next weekend!
Posted by Running Librarian at 7:08 PM

Looks like fun. It's always nice to run into people you know at a race. It just makes it more memorable. Good luck next weekend!

So fun that you always have running club people to run with!!
That's impressive that a bunch did the 5K and 10K.