October is the month of PR's

So every race that I have/will race has been or will be a PR!  I would say that October has been a pretty good month of running.

So this morning I woke up to head up to run the Army 10 miler.  Last night I got a text from my friend Lee, who I have not seen since March, and he wanted to know if I was running the ATM.  Well of course I am. It is my favorite 10 mile race!  We were going to try and find each other.  Who knew if that was going to happen with 35,000 runners.  I left earlier than I expected to and boy was I glad, I always forget the back up on the exit ramp to park at Crystal City.  I parked with little problem and headed to the mall for some indoor plumbing.  When I got to the bathrooms I noticed the oddest thing.  I have never seen this sight before.  There was no line for the girls bathroom, but the guys were hanging out of the door.  Say it ain't so..the girls have no line?!  That had to be a good sign.  When I came out of the restroom, the line was super long for both guys and gals..definitely a good sign for me.

Next I headed over to the Pentagon to look for Lee and seeing if I could run into anybody from run club.  After a few texts I ran into Lee. 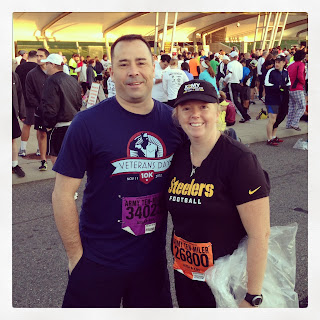 I think I may be trying to grow some sideburns with my hair and the hat..trust me people I am not growing in sideburns..yet. :)  I can't wait until the marathon is over and I then can get a haircut and not have to worry about my hair being too short for a ponytail.
I walked over with Lee to bag check.  I did not have to bag check.  I had my new spibelt and my handheld along with my garbage bag to keep me warm until we started to run.  I will say that I loved my spibelt!  I didn't even feel my phone in the belt.  No bounce or anything.  Since it did so well on my 10 mile run, I am thinking it should be fine for 26.2 miles.

When the orange coral started to move I notice that there were two guys that were super excited to run. They started their garmin about 50 yds from the start and tried to take off in the crowd.  Yeah I know my time doesn't start until I cross the mat..no pre-running for this girl.  As we crossed and headed out for mile 1 I had the heaviest breather behind me.  I thought that he was going to pass out from lack of O2 at one point.  Poor guy I don't know how he survived for 9 more miles.  He was huffing and puffing pretty loudly before mile 1.

At mile 5ish I saw a little kid zip past me.  He was maybe 8.  He had some speed.  Right behind  him was dad.  He was sweating, huffing and puffing and not looking that great.  We said something to him.  He then told us that he told his son if he beat him he would give him $50.  Well I am going to guess that the kid earned some extra cash today.

I headed over the bridge to finish the last 2 1/2 miles.  I normally walk some on the bridge.  I hate the bridge.  This time I just trudged along and didn't walk.  I felt pretty good.  The end of the race is mostly up hill.  Who does that??  I knew if I kept going I may PR.  I kept going.  I finally made it to the end and sprinted a bit.  I didn't have much left in my legs though.  Turned out I knocked off 2 minutes off of my time!  Oh yeah!

I went and got some water and food and ran into... 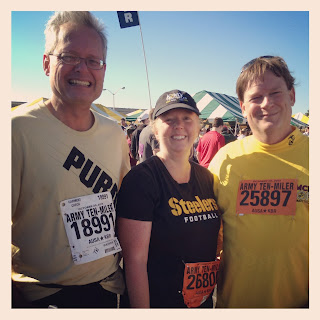 Yep Gary.  This time I had Gary radar!  I saw him walking by and said hey.  I was getting chilly and I really wanted my hoodie that was in my car.  So we headed back to Crystal City.  It was about a 2 mile hike.  I will think of it as my cool down walk.  I headed back to my car and got a text from Jeff and Marie that they were in Champs next to the mall.  Since the line was horrible to leave the parking garage I figured might as well head over to Champs for some food.  I haven't seen Jeff and Marie for months.  So it was nice catching up with them.

October has been the month of PRs.

Posted by Running Librarian at 7:32 PM

WooHoo - glad it was a great day for you!! Way to go on yet another PR!!! I love that you always see running buddies at your races!
Can't wait till you PR your marathon!
And - glad the new belt worked out so well!

Kim it is always fun to run into friends at races :)

Congratulations! I haven't PR'd in I don't know how long. Looks like a fun day!

I've never done the Army 10 Miler, but I think next year I just might :)