So it has been raining pretty much all week long.  I was stalking my half marathon and saw that there was a 50% chance of no rain..now if you want to be a pessimist there was also a 50% chance of rain, but I was trying to think positively! Turned out the weather didn't like all of my positive thoughts!

I decided last night that I would wear my capris and a short sleeve shirt.  Turns out I couldn't find my capris this morning (at least not the ones I wanted) and I had to put the fan on while I slept so I was pretty sure that I should wear shorts.  I took the dog out and it was a light drizzle, 64 degrees out..yeah definite shorts weather.

As I drove to the half I noticed that the temps were falling a bit.  When I pulled in to the parking lot, it was raining a bit more than a drizzle.  Now I am questioning my outfit.  I used the bathroom and then headed back to my car since I had some time.  Megan texted me that she was here and didn't want to leave her car and she was questioning her outfit selection as well.  Megan was running the 5K and wearing a tank.  Yeah it is starting to rain a bit harder here as apposed to where we drove from.  I guess I wasn't the only one who didn't dress for the weather.

As we were standing around under an overhang waiting for the race to start we saw Red Man!  I love this guy.  He always wears his red tank and red shorts.  He also usually wins his age group since many times he is the only one in the 80 plus category.  He brightened my morning up a bit. 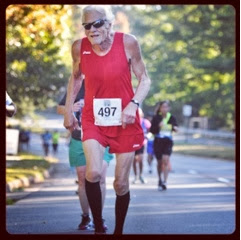 This is not from today.  If it was everyone would look cold and wet.


Finally the half marathoners lined up and we were off.  It wasn't too long before I knew I was going to hate this race.  I do not like running in rain.  I do not like running in wet shoes.  Soon I would have to get over it. When we started out I tried to miss the big puddles trying to hold off the wet shoes and socks for as long as possible. The rain picked up a few miles in so I knew that it was looking like it was going to be a long 13.1 miles.  There was no saving the shoes and socks.

I was feeling pretty good for most of the run.  I was trying to pick up some time on the down hill parts and settle in to a slow climb up the hills.  I also stopped dodging puddles.  My shoes and socks were sloshing around so might as well just run straight through the stupid puddles.  My clothes were soaking wet.  I must have been running with an extra 5 pounds of water being soaked up by my shorts and shirt..oh and socks, can't forget my extra absorbent socks!  I was hating life.  I did notice that my thighs were not rubbing together because they were so wet that there was no possibility of chafing there.  My shorts were quickly looking like a wet diaper.  Yeah I was regretting the no capri choice.  At least I thought ahead to wear a black shirt so it wouldn't end up being a wet t'shirt contest!  No white shirts today!  Why didn't I look harder for my favorite pair of capris??  Oh well nothing I could do now except finish this awful race.

I noticed that at mile 10 I was at a PR for my 10 mile time.  At least I think I was.  The rain was messing with my garmin so I locked it on regular time.  It wouldn't go to the pace screen so every mile (for the most part) it would then pop up with my mile time.  So most of the time I was pretty much guessing my times.  I know that I was holding a pretty good pace for me.  So I was feeling happy about my time.  Once again the last three miles sucked.  It was a lot of up hill.  Who does that??  Nobody wants to see a hill at mile 11!!  I tried to use the downhills to pick up time because I know the up was not going to be pretty.  I headed for the finish, which was around a track.  I was hoping for a PR but I really slowed down a lot during the last few miles.  I was never so happy to see a finish line in all of my life.  When I crossed Megan asked if I wanted food.  I was only interested if they had hot chocolate.  They didn't so I didn't need food.  My legs were so cold for that last 4 miles.  I headed to my car to change into some drier clothes.  I ended up wringing out my socks before putting them in my car.  I don't think I have ever been that wet before!  Note to self I still hate running in rain. 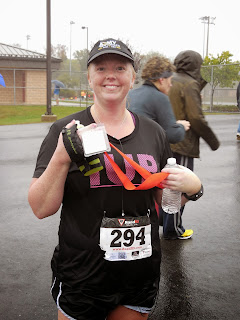 Once again my Army 10 miler hat comes in handy!  I really should buy a running  hat.

Megan and I headed off for our traditional brunch after a race.  I enjoy some french toast..I know shocker!

I came home and checked my time and lo and behold I now have a new PR!!  I shaved 3 mins off of my half marathon time.  Maybe I need to start running more races in the rain.
Posted by Running Librarian at 7:49 PM

)WooHoo - great job running a PR (in the rain even)!!!
You are a running machine these days - your times keep dropping and you keep going!!!