This morning I ran the Four Courts Four Miler with Becky to help celebrate her birthday!  It was a perfect day for a run!  I did realize that I was a bit overdressed for the race.  Which is a good thing because I think next weekend's RnR Half will have the same temps..so note to self do not wear a long sleeve shirt. 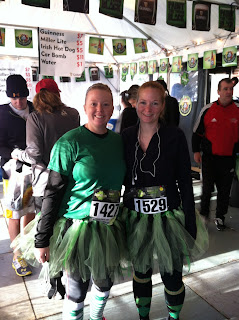 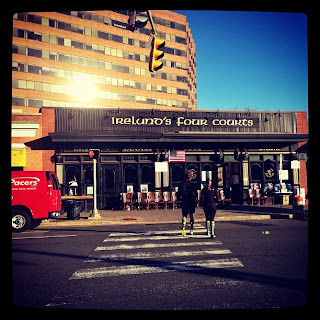 I think I may wear the tutu for the half next weekend though. I figure if it annoys me I can dump it along the run.

There were lots of people running Four Courts.  I had almost forgotten how packed it feels right before and right after the run.  I guess when the race ends at a bar people tend to stick around.  I was hoping to see my favorite old man runner in red..but I didn't see him this year.  He really is one of my favorite runners.  I hope when I am his age I am still running (he has to be in his 70's or older) 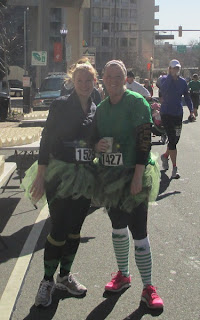 The course is straight down a hill and then you turn around and run straight up the hill..ugh..the downhill is great, the uphill not so much.  We stopped to get a picture at Run Club's water station.  Even with the stop I still PR'd by over 2 minutes!!  That's right...ran it better than last year!  I guess all of the running I have been doing is starting to pay off. :) 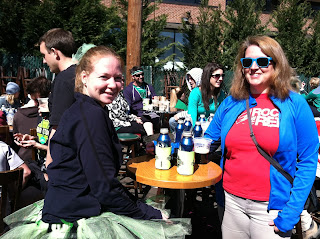 Afterwards we met up with some friends and enjoyed some beer.  Can't beat running and having some beers to help celebrate a birthday run!

Next race:  Rock n Roll USA Half..
Posted by Running Librarian at 4:12 PM

Hello! I just stopped over from Kim's blog to see who you are/what you are all about and the first thing I see is that you are a STEELER fan! Hello sister, we are going to be best blog friends! It was a depressing season, but we ALWAYS come back strong from bad years.

lol..I'm hoping we have a great year..sad that Harrison is now gone..ugh...may he not end up in Baltimore! thanks for stopping by Amy!

So sad to see Harrison go, too. His eyes haunt all the offensive lines in the league. He definitely won't go to Baltimore since now they have to pay Flacco so much for being a SB-winning quarterback (puke). I cannot wait to see what the new season brings!

That looks like a fun race (especially for a birthday celebration!). Love the tutu!!
Any race that ends with a beer or 2 is great!
Nice job on the PR!