So what do you do on a snow day?  That little christmas gift of a day that you get to sleep in and not feel guilty...  why I do not run..that would just be crazy!!  It is early afternoon..I may head to the gym later we will see..but if not that is ok.

Last night I decided since I was pretty sure that we were getting the day off, to head to run club.  I know it is a Tuesday of course I was going to go to run club.  But I had my mind made up that I wasn't going.  I had to stop off at a viewing for one of our kids at school whose parent had passed away, and I thought well no way can I do that and run at run club.  So afterwards, since no rain was in sight (and it was supposed to start off as rain first)  I figured I was pretty safe to make the trek up to run club to socialize, not run.  Glad I did..always fun seeing friends.  On the drive home it was crazy how quickly the weather changed..I went from absolutely nothing, to rain..a few mile later it was sleet (but nothing was sticking b/c it was still 35 degrees out) and then ten miles from home it was a whiteout (but still nothing was sticking to the roads.)  I made it home, with no real problems, to snow on cars and grass and feeling really good about a snow day.

Finally they call the day and I feel so excited..I just can't hide it..I'm about to lose control and I think I like it...

Anywhoo...today I thought I could sleep in but mom called at 7 am. to ask if I had a snow day.  And after that I made some yummy snow day cinnamon rolls (they were homemade from the pop-can)  I had a hunch and thought I would enjoy some yummy cinnamon rolls on my day off so I picked up a can at the store a few days ago.  I haven't had them in years. 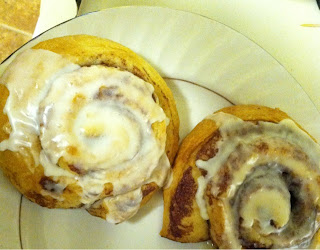 I know you are thinking after that I probably went for a run..umm  no not really.

I did take Riley for a walk.  I love walking in the snow.  This snow was not really that much fun to walk in. There was so much water with this snow.  As soon as it hit the roads it would turn slushy...causing me to have wet boots and wet socks.

I did see the local Marine Runner running in da 'hood.  I asked him if his feet were soaked he said not yet as he ran by...hmm  my feet need wrung out after a short walk..how could his feet be dry?

After the walk I caught up on some tv and a nap.  There is something about snow day naps!  Afterwards I headed to Panera to enjoy some soup, since I had a dollar off of soup.  I may head to the gym later to hit the mill..but if not that is ok...it is a snow day after all!

Hope everyone enjoys the day!
Posted by Running Librarian at 3:33 PM

I will forever feel like a little kid when a snow day hits!
food, naps(yes, yes!) and lots of tv and relaxing!