Thursday night Megan and I headed over to pick up our race packet.  You know you've been to a lot of race expos when all you walk away with is a green head band. 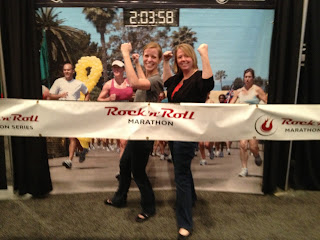 We did get to squeeze in a run through the finish line in flats!

Saturday morning I got up at 5 and by 5:35 we were on the road heading towards our first half  marathon of the year.  We wanted to meet up with some half fanatics for a picture, but the metro ended up running really slow and we missed it.  So after we got off the metro we dropped  off our bags at the correct school bus.  Which turned out to be a great idea, because while we were standing in the portapotty line we saw the buses start to drive off..and then I saw quite a few people running the race with their bag on their backs.  How uncomfortable would that be to run with a bag on your back for 13.1 miles. 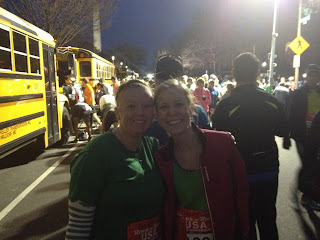 After bag check we headed over to the long portapotty lines.  We thought we picked a good line, but our line was slow.   Like it took 1 hour to get up front!  Yeah we missed the start of the race.  I figured I was ok since my corral was 31.  Megan ended up just jumping in on corral 30 and taking off because her corral already left.  But at least we didn't have to stop on course!

I didn't have my Garmin with me. It had a seizure that morning and claimed it wasn't charged so I was running Garmin free.  So I was trying to figure out my time based off of the clocks on course.  I think I was running a pretty steady 11 min. mile until mile 6.  Which is good for me.  Normally I am either all over the place or I start with a time and just steadily get slower.  I was feeling great running.  It is amazing how great a race can feel when you actually run and train before the actual race!  Well anyway, mile six turned into a mountain straight up towards the National Zoo.  Ugh!  I ran up half of it and then walked because I didn't want to spend all of my energy half way through the race.  Once at the top it was pretty flat and I started running again.  Some of the water stops looked vacant.  Not a lot of volunteers at many of the water stops.  Lucky for me I had my handheld so I didn't stop at too many water stops.  When I did stop, I just filled my bottle from the water barrels.  I felt good for most of the race.  That last 5K sucked though.  For some reason I just hate the last 5K of a race.  Really from mile 11 on I was ready for the race to be done.  At one point I thought I could walk faster than what I was running..but I was still running!

When I was heading towards the finish line I was thinking that I just might have finished with a PR (if my math was correct)  Although I wasn't really sure because the first clock I saw was at mile 1 so I was doing all of my math off of that first clock.  But I was really happy with my time.

As I cross the finish, Gary from Run Club was there.  We always joke that he has teacher radar, and yep his radar must still be working!  Odd that no matter how large the race we usually end up running into Gary!  We grabbed some food and water and got some finisher photos and then headed to the meeting spot where I was going to meet up with Megan.  Well Megan wasn't there because the bag pickup was a mess.  Long lines, slow bag pickup didn't make for happy runners at all. 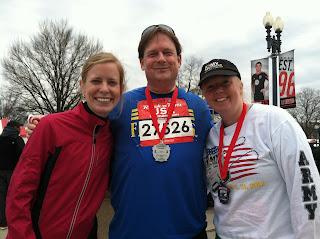 The race weather was perfect!  I would like to think it didn't rain because I wore my hat.  (I'm not a huge fan of hats, but I thought I would want one if it was going to rain) It was overcast without a bunch of wind.  Maybe that helped me knock off 4 minutes from my last PR!  I'm slowly chipping away at my half marathon time.  Now that we finished it was time to celebrate with some french toast. 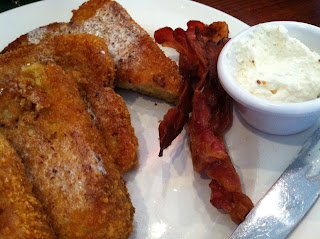 Afterwards I headed home to shower and take a nap.  But before that I checked the mail and look what came... 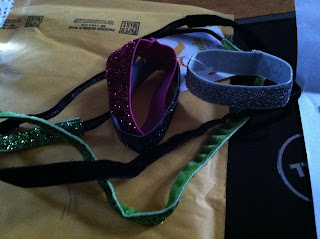 Yeah my Bic Bands came! lol..  well maybe I will have some for the next race!

Next up is the Cherry Blossom 10 miler.

Posted by Running Librarian at 9:22 AM

Yay!! Way to go and beat that PR!! Wonderful and excited for ya!!

YAY! Congrats on your PR!

Congratulations on the PR! That's awesome!

Congratulations! Walking out of an expo with just a headband? Didn't the running cops drag you back in again?

Congrats!! So much fun:)
I never buy anything from expos anymore either.
What's a bic band?
❀Barbara❀
My Running Shortz

Great RR and congrats on getting such a big PR! The weather turned out great considering there was an 80% chance of rain!

Congradulations, I was out there volunteering! So happy it did't pour down in rain.