Ran a 4th of July run yesterday.  Let Freedom Run was a family friendly 5K race held at 9am.  Who schedules a race a 9 am in July?  Needless to say it was  a very very hot run.  From mile 2 on I was miserable, but I finished.

Look who we got to run with: 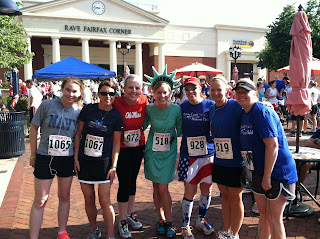 Yep the Statue of Liberty showed up to run.  You would think that it would be her busy time in New York, but she took some time out of her busy 4th of July to run with us!
Oh she wasn't the only patriotic runner we had in our group. 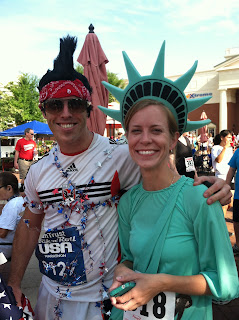 So great that Ryan and Megan dressed up for the run.  As one random little kid put it, "Cool hair bro!" 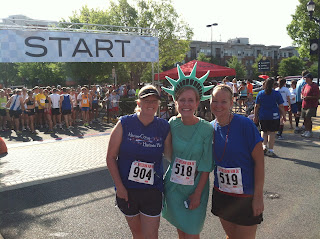 Before the race started we were super happy.  We had yet to experience the heat while running.  If only they would have started it at 8am..the heat moved in around 8:45. Becky and I ran most of the race together until I was mean to her and kept telling her to keep going.  I don't know what it is right now, I just don't want to run the miles..I would rather walk.  I didn't want to hold her back. I have been having a hard time just running.   I do think it has something to do with my hatred of the heat.  I have not really acclimated to the heat yet.  I always end up feeling ill.  I might have to take some of my running inside.  I hate running on the treadmill, so we will see if I can head to the gym a few times a week.
After the run we had some much needed cooling off treats. 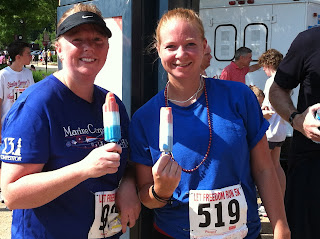 Those were the best Popsicles ever!  And red, white and blue to celebrate the day!
Hope everyone had a wonderful July 4th!
Posted by Running Librarian at 9:03 AM

I have a hard time breathing when it's that hot out. I guess it's the humidity that makes it so thick and unbearable. Popsicles sons great after a run though! Congrats!

Don't feel bad about the heat slowing you down - it just happens! Popsicles after a hot race would be the best!