So I might be a bit crazy this evening.  I haven't been to running club since before Christmas and I pick the day that we had a bunch of ice to start back to running club.  I'm hoping that the run/bike path is not icy and that I will be able to run.  I do not usually run in ice or snow but I feel like I really should head to the running club to use some of this cold weather gear that I have been stocking up on.  I figure if I find the path icy I will either walk or head back to the bar and enjoy a beverage while I wait for everyone to finish their run. :)  I know I could buy the ice grips things to add to my shoes but I have already broken my leg a few times and I don't feel good running on ice or snow no matter what my shoes look like.  Well wish me luck.  Oh..this will be three days in a row of Tuesday!
Posted by Running Librarian at 5:12 PM 3 comments:

So Sunday started the marathon training schedule.  Luckily it was 30 mins of cross training, so I took the dog for a walk and played Just Dance 2.  I was sweating after Just Dance so I am counting that towards my Sunday workout. :)  If you are wondering I have a new go to song...Wake me up before you Go-Go..by wham...I know, I know, it shocked me too.  I was always doing so well with the It's Raining Men that who would have thought I would top the 10000 points for the Wham song.

So last evening we had a girls night out at The Melting Pot. 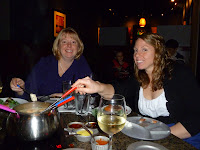 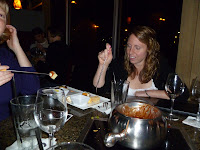 ﻿Now if you notice in the second picture that Kristen and I finished up the other plate of chocolate dipping goodies for the table.  You just can not let cheesecake and brownies sit at the table untouched.  I think they lock you up for stuff like that, so rather than risk a police raid Kristen and I took one for the team and finished up some of the left over goodies (which also included some pineapple and strawberries...see we were thinking healthy).  Very yummy.
Since I had so much chocolate and sweets the night before I decided that I must run today.  It was supposed to be a stretching day but lets face it I have had lots of days of stretching for the last couple of months.  So off to the gym for a 40 min run and a 40 min. bike ride.  Yeah I rock lol.
Snow/freezing rain/ ice are supposed to move into the region over night.  Is it bad that I am hoping for at least  a 2 hour delay tomorrow??  Probably won't happen but we will see.  Then it is back to the running club.  I haven't been there since before Christmas.
Posted by Running Librarian at 5:03 PM 6 comments:

Half Marathon Training to start

So it is official, I have to stop being lazy and start..ugh...training!  This weekend is the first week of half marathon training for the Flying Pirate Half in April.  So no more excuses.  I don't know if it says anything that I have only written down one week's worth of training though. ;)  This weekend I will finish writing out the rest of the plan.  Well hope everyone enjoys the long weekend.
Posted by Running Librarian at 6:52 AM 6 comments:

Email ThisBlogThis!Share to TwitterShare to FacebookShare to Pinterest
Labels: training

Is that funk you or me??

So I had a wonderfully lazy Sunday.  I love lazy Sunday days.  I probably should feel guilty for not doing half of what I should be doing around the house, but I don't.  I did get out and made it to the mall to buy some cheap bargain books for my first graders who come to my morning reading with a parent this Friday.  You can't beat the bargain bin, especially when I am giving away 15 free books a month to the first 15 families that show up for my monthly morning reading.  This month it is first grades opportunity to bring a blanket and a parent and read before school starts.  They were very excited for the free book but more excited for the hot cocoa with marshmallows!  (The cheers really went up for the marshmallow announcement).

I also made it to Dick's and bought a cold weather compression shirt.  Now since I am purchasing cold weather gear I will spend most of the winter in the gym on the treadmill (isn't that how it always works).  I was going to try to run outside but the wind was horrible and it took my breath away just walking to the car so I quickly decided to head to the gym.


I wanted to skip the gym but I talked myself out of that idea.  I did end up going and had a nice short run while watching the eagles game.  I have forgotten  how much I like running and watching football.  I end up not worrying so much about my distance and just watching the game.  Too bad I remember this at then end of the season.  Oh well next year I guess.  I was also happy that I waited until the afternoon to go to the gym because all the New Years people love to go in the morning (I normally go in the morning but I didn't want to fight for any machines).  So that was a good decision, no fighting.  The only issue I had was I was on the treadmill and a guy jumped on and I believe he had some rank body odor.  At least I hope it was him!  I almost had to get off.  Then I was worried that its me.  I kept thinking I didn't smell it till the guy started running, but then maybe I am sweating more and it really is me!  Oh great, I am a stinky mess!  Then a few minutes went by and I am thinking what if I am the one offending this guy and it really is me that stinks...he stops running and leaves and wouldn't you know it the stink left too!  So I am guessing that it was the guy and not me. 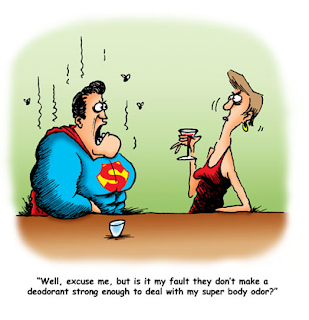 Then I got to thinking, which is worse, a person who takes a bath in perfume (you know so much so you can taste it while you run) or a person with B.O.?  I almost think it is a toss up.
Posted by Running Librarian at 6:11 PM 1 comment:

So my friend Stacy called me yesterday to schedule a date at the gym to try Zumba.  I agreed but I was not looking forward to it.  The last zumba class that I tried had a Nazi instructor that would come up to you in the middle of the class and yell at you that you can go faster and you are not putting forth enough effort.  Ugh!  I hated that zumba class.  First of all I felt like I was all arms and legs trying to do Zumba and then I had an instructor yelling at me to go faster..not my idea of fun.  Needless to say I was not looking forward to this zumba class.

Well I met Stacy at the gym.  We waited for the step class to finish up with the other 20 or 30 people waiting for Zumba.  Looked like there were a bunch of regulars that knew each other.  I also noticed that apparently if you have the word Zumba on your clothes it must be easier because 3 or 4 people had some sort of Zumba clothes on.  Well the music started and away we went.  After the 7 minutes warm up I was sweating and realizing I am built like a box.  My hips do not move, my butt stays where it is and doesn't like to make much of a fuss.  I did try and turned out I had much more fun with this instructor than the other instructor from a different gym.  After the hour of sweat I realized I am not very good at shaking what my momma gave me.  :(  Well at least I had fun.  Looks like Stacy and I will have a standing date with Zumba on Thursday nights.  This should be good because it will be my cross training day for my half marathon training!
Posted by Running Librarian at 8:47 PM 1 comment: