I'm not big on resolutions.  One year I made the resolution that I was going to look 5 strangers in the eye and smile at them.  I tend to not look at people when I am out and about.  I thought this might also be the key to find love (or a restraining order).  It was much harder than it sounds to do.  I also felt like I was a bit weird stalker girl.  So that didn't last that long.  It was also hard when I went to work and came home.  Not a lot of stranger interaction there.  Well this year I am going with the old stand by of millions of people.  I am going to work out 5 days a week and visit the gym more often.  I know I slacked off after the 1/2 marathon in August.  It also helps that I will be starting my 1/2 marathon training soon too. :)  I would like to increase my pace while running too.  We will see about that.  I think I am destined to be a slow runner.

Well looks like today is going to be a beautiful day in Northern VA.  So I will be running the hood today, after I go grocery shopping.  It is always so much fun to come back from vacation to an empty refrigerator.  I will say I did a very good job watching my eating at my mom's house.  Not too much food or cookies and I didn't gain any weight (and might have actually lost a pound or two).  So hopefully I can keep that trend up this year.

Hope everyone has a safe and happy New Years!
Posted by Running Librarian at 8:56 AM 3 comments:

Well no gym today (I know shocker!).  Headed to the Steelers  bar for the Steeler's Christmas party.  Free door prizes (hope I get something good and not another terrible towel) and free western PA buffet.  Gotta love it.  50/50 raffle is always good, I have a good feeling this year.  I won the raffle a few years back (346 dollars) but this year it has not been going so well...so I think this could be the day!  My friend Grab and her boyfriend Zack are heading to the bar.  If either of us win we split the winnings.  So wish us luck!  I also hope that the Steelers win to get into the playoffs.  Not sure if anyone is going to beat the Patriots this year, they are on a roll, but you never know. :)
Tomorrow is fat club (ok it is really called wellness club at school but I think fat club sounds funnier than wellness club) and then secret Santa with the work friends.   Maybe I will be able to squeeze in a gym run after dinner.  No run club this week because I need to get my oil changed before heading back to PA for Christmas and Tuesday is the only day available.  All in all I think this week is going to be very busy.
Posted by Running Librarian at 12:18 PM 3 comments:

I love watching the Iron Man.  I like seeing the elite athletes, but enjoy the stories of the everyday tri-athletes that are running Kona more.  80 year old man running Kona...incredible!  I hope I can just run a few miles when I am 80.  Then the people who didn't make the swim cut off times are just heartbreaking...all that training and they don't get to see how they would do.
Posted by Running Librarian at 5:36 PM No comments:

shaping up for the 2011 running season

So I just found out that we got into the Cherry Blossom 10 mile run.  Not my favorite run but I do love the french toast at the restaurant after the run.  So here is the running schedule for the spring so far.
There is a 10K in Fredericksburg, Va in March.  Fits perfectly into the training schedule leading up to the Cherry Blossom run.  Then April 4th is Cherry Blossom 10 mile run with a group of 9 friends.  Then some people from the running club got in too.  So should be nice to maybe see some people that I know among the 15,000 runners.  Then the next weekend is the half marathon redemption weekend in OBX.  Hopefully my second half marathon will be better than the first and  I will be able to run it and not be ill.  Should be a fun run because it is the first run where some friends are willing to travel and actually show up to cheer us on.  Now I will say it is not the weekend of the run, so who knows if they will actually come to cheer me, Kristen and Lucy.  But at least they are telling us now that they are going to come and cheer us on.  The prerequisite is that they need to make a sign to hold for us. :)  Should be fun.  After that it is all up in the air.  Kristen and I were talking about starting a running club at school for the third, fourth and fifth graders. We were going to do girls on the run, but I think I am too late with the applications to start the running group.  No problem we can start our own.
That is my running update for next year.  I am off to enjoy my first snow day of the school year.  ﻿
﻿
Posted by Running Librarian at 8:34 AM 4 comments:

So I ventured into DC to see the National Tree and the state trees with some friends after work.  We thought it would be a great day to see it since it is the middle of the week and hopefully not a lot of people blocking the trees.  Turns out we were right.  The only damper on the night was that I dropped my camera and now I can't see anything on the screen...looks like a new camera will be in my future...grr  I hate buying new cameras.  I could spend my my on other things.  I guess when it flies off your arm you need a new one. 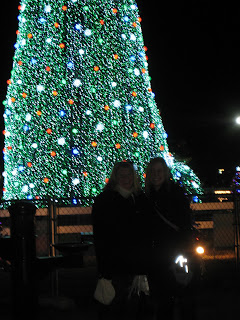 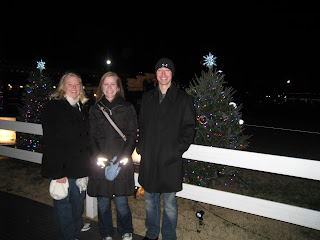 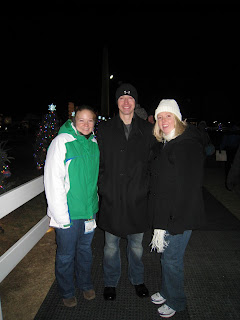 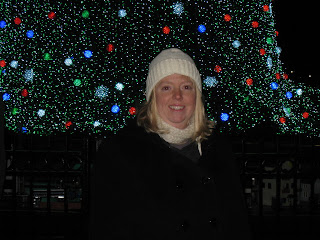 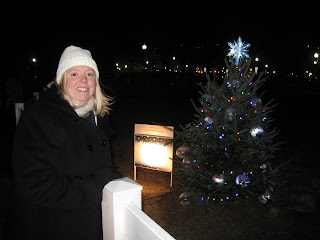 Email ThisBlogThis!Share to TwitterShare to FacebookShare to Pinterest
Labels: Christmas

Well the annual ugly Christmas sweater party was last night.  I made my ugly sweater and I thought I had a pretty good chance of winning.
Well turned out that some of the people that were going to come but unfortunately this was the week of sickness.  So it was a small group.  I still thought I had a winner in my shirt.

So the winner was chosen by ballots.  And I won!!!

I know you all are jealous of the prize for the winner.  Next year I know people will be working for that belt too.  We had lots of fun and now I am waiting for a steeler win.  Tuesday is running club.  I missed this week week due to the plague.  It should be a freezing cold run.  Luckily I just bought a new running hoodie. :)
Posted by Running Librarian at 10:31 AM 3 comments:

down for the count

Well the kids at school have infected me again!  I already had the flu once but now I am lucky enough to have it a second time (at least I think it is the flu)  I have a sore throat, headache, had a fever but that is gone and an upset stomach.  Thanks kids for ruining running this week!  I have an ugly Christmas sweater party on Sat, hope I am cured by then...I have been ill since Monday so I am hoping that tomorrow is the turn around day.  Fingers crossed.
Posted by Running Librarian at 8:38 PM 3 comments:

Email ThisBlogThis!Share to TwitterShare to FacebookShare to Pinterest
Labels: sick

So I got a new cold weather zip up and decided I would try it today. It is 35 degrees outside last week it was 65 degrees outside.  I figured I might as well try to get used to the cold weather running...FAIL!  I finished up 1 mile with ears that were way too cold, a bad knee that was not enjoying the running outside, arms and fingers that were near frostbite (and if you think it was too warm for the bite you should feel my arms and fingers..I am sure they must have been turning blue).  I hate this time of year, I never know what to wear.  Last week I ran with the running club and I was sweating with thin long sleeve shirt on...do I put gloves on yet?  Ear warmers??  I don't want to be an alpaca carrying all my extra layers b/c I wore too much clothing.  Today, however, I didn't wear enough.  The wind was a blowin' and I was a freezin'.  Oh well I will head to the gym later on and try the running thing again, maybe tomorrow after school. :)

On a totally unrelated note, the Steelers play the Ravens tonight.  I can't wait!  I hope Big Ben with his broken bone in his foot is able to play tonight.  Otherwise it might not be a very fun game to watch.  Is that bad that I am wishing that a guy with a broken foot sucks it up and plays football?  I mean he broke the thing in last week's game and he was able to finish the game out...

Well I signed up for the lottery to run the Cherry Blossom 10 miler again.   We have 10 people so we are signing up as a group.  I guess it is now all for one, one for all.  We either all get in or none of us will run.  The Cherry Blossom run in DC is not my favorite run.  Last year I ran it and after I was done they ran out of bananas and water by the time I was done running.  Who runs out of water on a ten mile run?  There are over 13,000 people running the race and you can't provide enough water for the slow pokes at the end of the run?  For those of you wondering how I judge my favorite runs I like a run with some yummy food at the end or some fun door prizes. :)  This run has neither.  I keep asking myself why I keep signing up for the run...running with friends is fun.  And this works out to be a perfect race for my half marathon the next weekend.  So I guess fingers crossed that we get in.

I went to the running club again last night.  My friend Megan  won a free RUN glass from the local running store.  I love when people get to win random prizes :)  Megan is going to run her first Cherry Blossom 10 miler with us too.  She told me last year that she wouldn't run across the street let alone run a race.  Well since then she sponsored a girls on the run girl, she is training with some girls on the run girls, she has joined the running club and has turned down the school Christmas party because "Tuesdays are saved for running".  Yeah Megan is turning into a runner :)  Cracks me up!
Posted by Running Librarian at 9:19 PM 1 comment: