This past weekend I volunteered at the George Washington Parkway ten miler. All of the water peeps met up at 6:30 a.m. to get our water stop ready for a bunch of runners 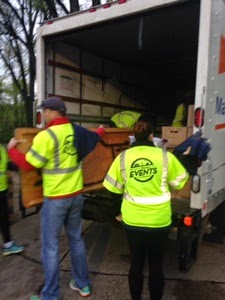 We were expecting just a few runners to stop and drink the best water on the course. Now don't ask the folks at mile 8 if they have the best water because they will lie to you and say their water is the best. It is obviously not the best since mile 6 has the best H2O around! 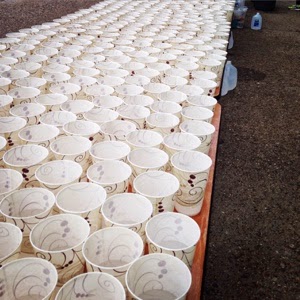 I had some people that I was watching out for. Some run club friends were running along with Megan.  I was on the look out for the damn juggler too. The last time I worked this exact water stop I saw him juggle by. I was telling some of the people about the juggler. Jen has never seen the damn juggler and asked if I would point him out when he juggles by. Of course I would. 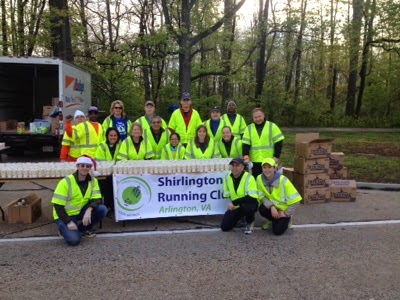 We quickly filled all of the cups and waited for our first thirsty runner. We didn't have to wait too long. Soon we were passing out water like champs. I cheered on the runners as I kept an eye open for the damn juggler.
Soon Megan run up and said hi as she enjoyed some refreshing water. Still no damn juggler. After a large portion of the runners left we got word from a runner that an ambulance was needed for a runner 50 yards away. The runner said it looked like a heart attack. Luckily we had a police officer right across from our water stop blocking a road. He quickly put the call in for help and then sprinted over to help the runner. In short time I heard that the man was talking and looked much better. Did he have a heart attack?  Who knows. But one thing is certain that there were two ambulances at the scene pretty quickly.  Not a great ending to the day. I haven't heard anything but I'm guessing that the man was all right. At least I'm hoping he is alright.
We cleaned up the area and before we knew it the crew was pulling up ready to collect all of our stuff.
I headed to the finish to meet up with Megan. The finish area was crazy so we decided to head over to crystal city for some pizza. Yum!  You can beat ending the running day with two slices of pizza.
Posted by Running Librarian at 9:24 PM 3 comments: 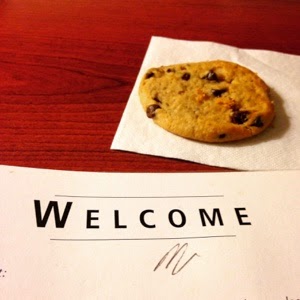 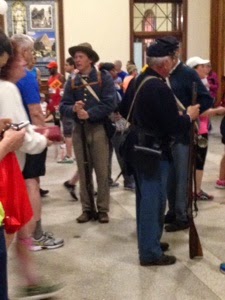 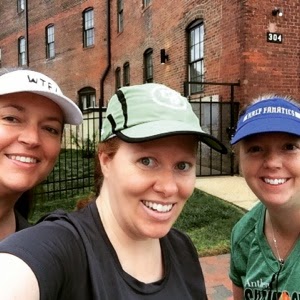 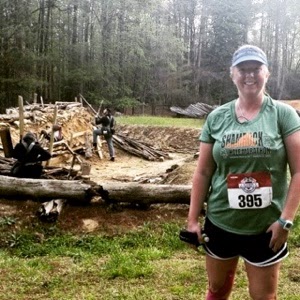 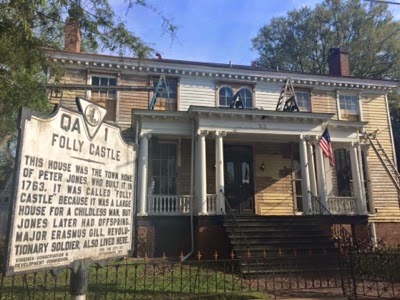 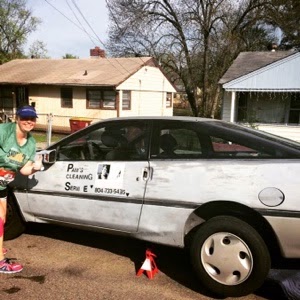 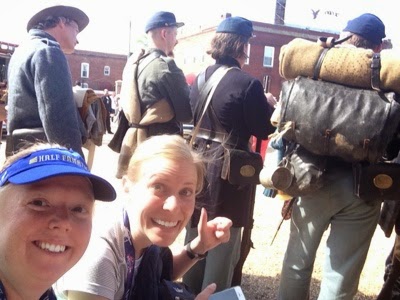 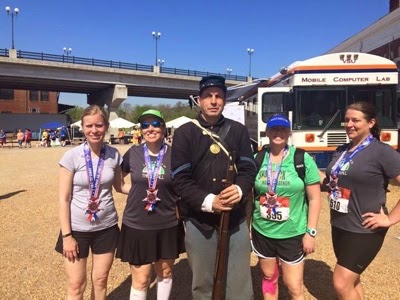 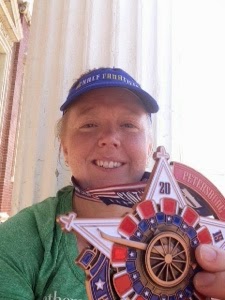 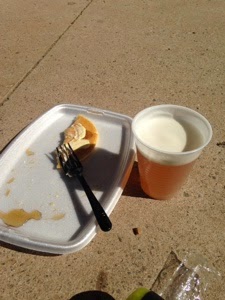 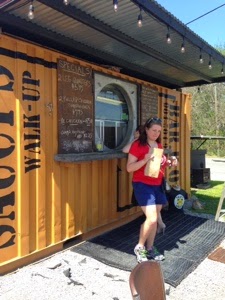 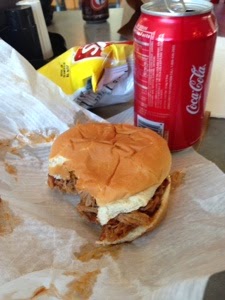 Last Sunday I headed into DC for the cherry blossom ten miler. It was perfect weather AND the cherry blossoms were actually in bloom! This is the sixth time running this race and I think this was the first time I've ran it with blossoms on the trees! 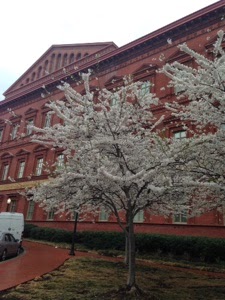 (Packet pickup at the building museum on Saturday)
Megan, Jen and I headed to the metro bright and early. We met new run club friend Ric at the metro with no problems. As some of you may remember, I do not love this race. It is really crowded and I always end up with the leftover nasty bananas that nobody wants. I head into this year knowing that the food is not that great and the chance of a pr is slim.
As we are checking our bags we hear that there has been an accident earlier in the morning on the race course and the police have a section blocked while they investigate. Due to this accident they have altered the course between mile 5 to 7.  We later learned that a pedestrian was hit by a motorcycle around 5:45 am and taken to the hospital. From what I have read the person was alive and I have not heard of a cherry blossom race day death, so that is always a good thing. The race director did a great job of rerouting  the course on such short notice. The elite women started on time about an hour after the accident.
At the time I thought I heard that the race with the reroute was still ten miles. Later I would realize that it was a bit short. Last Tuesday they told us the official distance was 9.38 miles.  I'm thinking everyone pr'd this race since there are not too many 9.38 mile races out there.
Megan and I headed to the portapotties and then quickly headed to our corals. There was not much of a wait before we were off. I did see that damn juggler before I hit the starting mat. He was dressed as Alex Ovechkin from the Capitals and juggling mini hockey sticks. I wish I had my camera on me to take pictures of the damn juggler. The good news is he never passed me!
The race was crowded as usual. I kept my head down for most of the race in order to not trip on pot holes. I was feeling pretty good. I had no idea of my pace or mileage because I forgot my garmin  at home.  When I passed a time clock I would then do the math to try and figure my time and miles. It helped keep my mind off of running. At one point we were running an area of DC known as Hains Point, beside the Potomac river, and you just saw row after row of cherry blossom trees. It was very beautiful. At mile 8 I started to hate running. At mile 9, Jen passed me. I just kept trucking hoping to finish under two hours for a pr. 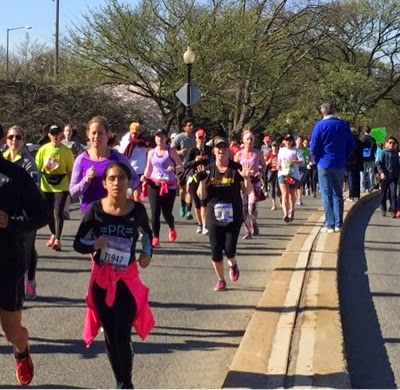 As we were coming up the final hill towards the Washington monument I spotted brad. He came to cheer on us girls. I love when we have friends cheering us on!
I finished well under two hours. I then found out it was a shorter course. Jen finished just in front of me and shared her pace number with me. I couldn't be too far off of her pace soooo.
Guess who got a pr and would have gotten a pr for the ten mile course too? 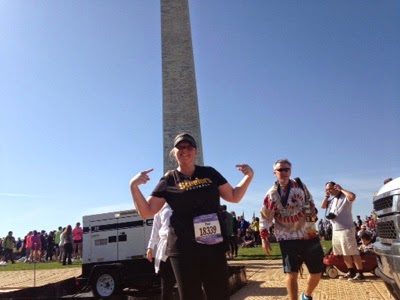 Yep, this girl!!
This whole training thing and actually running may just work!
We met up with everyone. 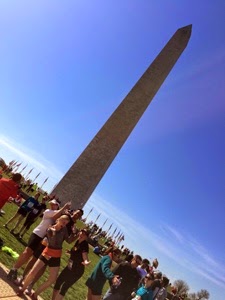 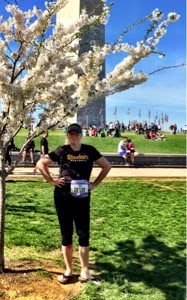 Brunch turned out to not be very easy. We headed to Eastern Market and encountered a 2.5 hour wait!  We waited a bit then people started to get hangry so people just split up. Megan, Chris and I gave up and headed over to falls church for some yummy French toast.
All in all it was a great day to run.
Stay tuned for this weekends recap of the Petersburg half
Posted by Running Librarian at 2:14 PM 2 comments: