Friday after work I met Megan at the commuter lot and we headed towards DC to run the Crystal City 5K.  Every Friday in April the local running store puts on a 5K run in Crystal City.  This was the first Crystal City 5K that I have done.  We parked and then started to look for some running club people.  We found Meagan, Sherry, Brad and Jen pretty quickly.  We didn't have long to wait until the race started.  We started and I was chatting with Brad a bit.  He hasn't been to run club in months and this was his first run back from calf issues.  As I was talking to him I saw the guy I love to stalk.  I don't normally stalk guys but this guy is just too cute not to stalk.  I see him at a lot of local 5K and 10K races. 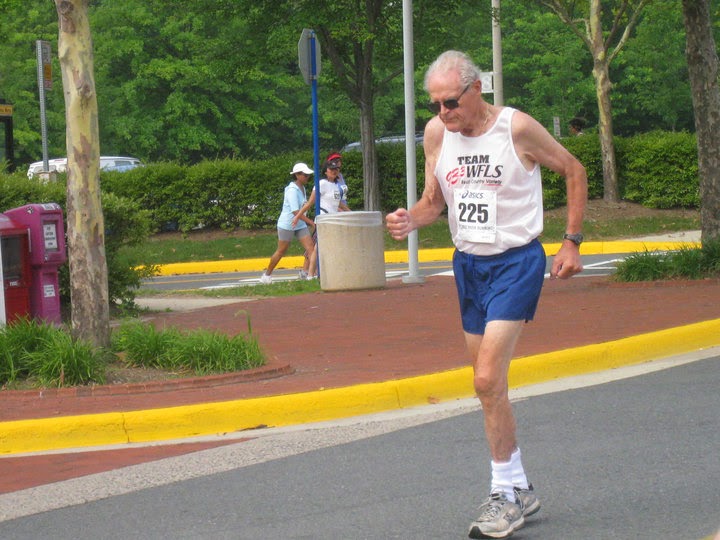 This pic is from a few years ago. (I told you I stalk him!) How cute is he!  He usually wears read shorts and a red tank..so I call him Red Man.

Well I was talking to Brad and saw Red Man and told him about my love for him.  I want to be over 70 and still be running and winning my age group.  Brad joked about Red Man beating him in the 5K and I took off after him.  I didn't want to lose him in the crowd.

It was a nice night for a run.  I was worried that it was going to rain/thunderstom earlier in the day but it held off and was perfect for running.  As we were coming back I noticed that Red Man had just passed me.  (yes I get passed by 70 year old men! )  I knew there was a photographer just up ahead.  How cool would it be to get a picture with Red Man!!  Yeah those are the thoughts I have when I have stalked a man for the last couple of years.  I won't show up at your work or stalk you at your dry cleaners but when the opportunity for a photo together presents itself I will jump on it!  So I decided that I would keep pace with Red Man for a pic.  He went faster so did I.  He fell back a few steps I slowed down slightly.  I don't think he knew what evil I was up to, which was probably better for him that way.  We got to the photographer and snap snap.  I can't wait to see the pics! I hope he got both of us in the picture!  Yes I have problems, I accept that I just can't help myself! :)

Red Man finished just ahead of me.  I was fine with that.  All I wanted was a picture with my favorite runner anyway. :)  My night was complete!

We all met up afterwards at our run club sign and chatted.  We got some pictures and then headed to a local bar to collect our free beer for running the race.  Such a fun night! 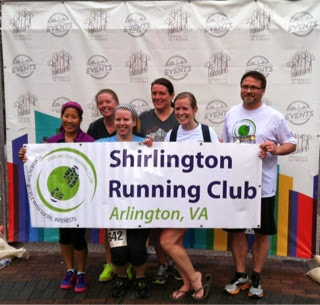 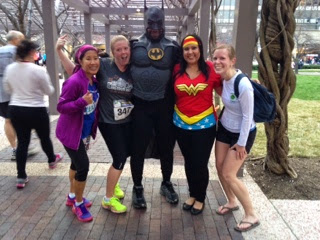 Who wouldn't want a picture with super heroes? 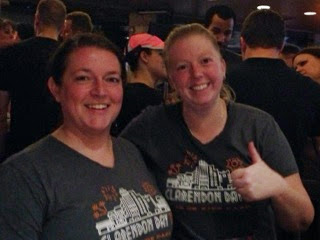 Unknowingly we wore the same shirt to run in.
Posted by Running Librarian at 7:43 PM 3 comments: