So last weekend I ran the Yuengling Shamrock Half Marathon.  I was supposed to run the full marathon, but due to a wonky quad I dropped down to the half.  I think that was a very smart decision.
It was also my friend, Kristi's first full marathon!  She rocked it! 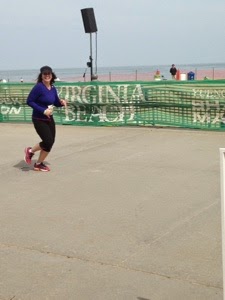 She was all smiles as she crossed the finishline!  Way to go Kristi!
The morning of the half I was trying out some adhesive to help my KT Tape stick better. 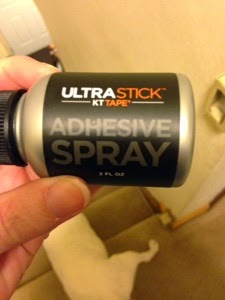 Where has this stuff been all of my life?  This stuff was awesome!  Normally my Kt Tape does not last more than a run. Many people find that they can keep the tape on for a few days and a few showers. Me, I'm lucky if it stays on for an entire run. Last run this is what the tape looked like. 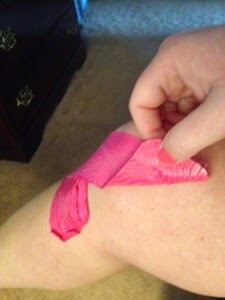 It loves to just peel off of me. I follow all of the KT rules like no lotion and use rubbing alcohol on the area prior to the tape. Still the tape hates me. Well this new adhesive works wonders. I put it on Sunday morning and it was still hanging tough on Tuesday. Thank you KT Tape! It actually could have stayed on longer, but I was done with it.
So back to the morning of the race. I took off early to find parking and meet Kristi's friend Amy before the start.  We were both running the half and in the same corral. I found parking pretty easily. I was going to pay to park ar farm fresh but it was full so I headed to find some free off street parking. 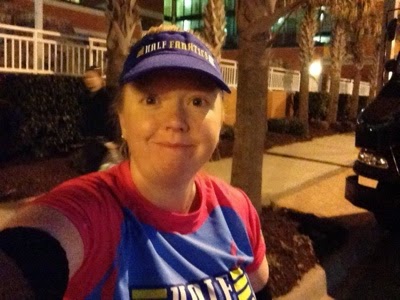 I parked and headed to bag check. I found Amy and we headed over to our corral to wait for the start. Last year a 16 year old girl died after crossing the finishline. This year her friends and family were back running for her. It was very moving to see them on course.
Amy was run/walking so we agreed to meet up at the finish. I was secretly hoping for a pr. It was a fast flat course and my last pr came while marathon training. Soon we were off and I was feeling pretty good shooting for a pr. As I was headed through the wooded part of the run we hit a sort of incline. I'm not even sure I could call it a hill. I hate hills and I felt no hatred of this bump. I was laughing to myself because you could tell the va beach runners because they were complaining about the hill.
I was feeling great.  My legs were feeling good, I wasn't feeling winded, mile seven was looking great for me. You know that great feeling couldn't stuck around for ever. My first leg pain came around mile 8.5. I slowed it down a bit thinking that would help. A mile later I knew today was not going to be a pr day.  Why leg, why?  My run/ walk started around mile ten. The one positive thing about slowing down was I got to enjoy an on course beer stop. I missed the earlier mimosas but I did have one shot of beer. I finished the half right around my average half marathon time. It looks like it just wasn't meant to be for this race.
I found Amy at bag pick up. With no problem. 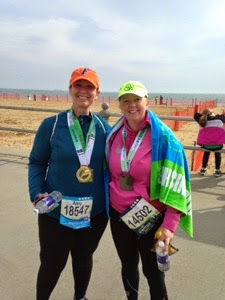 The wind from the ocean was cold after the run. Luckily I had a finishers beach towel to wrap around me along with my bright finishers hat. We then headed to the beer tent to grab one of our four free beers and listen to some bands. 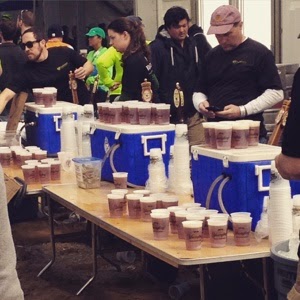 Runners like to drink beer. Yuengling was a great sponsor of this race. The bands were great too! 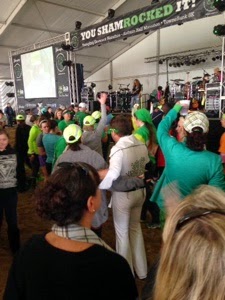 Even Elvis had a great time!  As a side note Elvis needs to not wear his leopard print under Roos when wearing his white Elvis jump suit. Just sayin'.
We headed out of the tent around one to catch Kristi finish her first full!  She was a rock star! 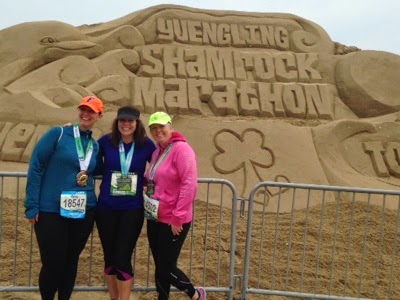 Other than my leg not holding up this was an awesome race and I may end up attempting this one again next year.
Posted by Running Librarian at 6:14 PM

Sorry your leg didn't hold up for the entire race!
However, I'm all about the beer after the race!!!

Damn, that Kristi is a rockstar! You are a good friend to wait hours for her to finish!